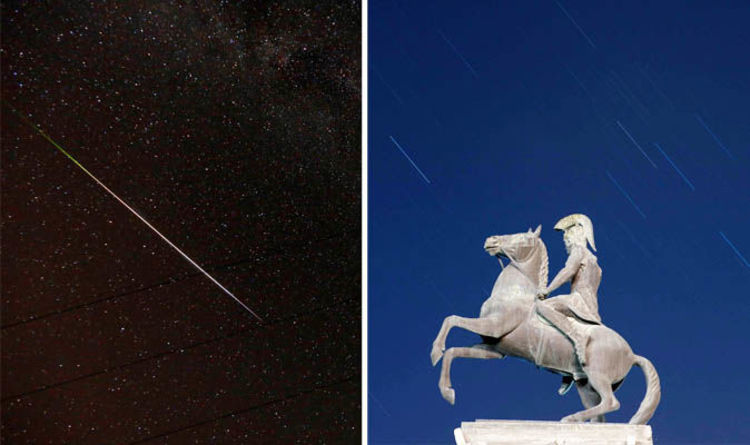 
The annual meteor shower reached its zenith between Sunday evening, August 12, and the early hours of Monday, August 13.

Astronomers at USA space agency NASA said the shower is best seen around 2am local time in the dark, pre-dawn hours.

Individual Perseid streaks may have been seen as early as 9pm or 10pm local time on Sunday but the shower goes much farther back than this.

The Perseids meteor shower actually starts around mid-July and ends sometime in the last week of August.

This means there is still a good chance you can catch a few fireballs tonight and in the coming days.

This happens because the Perseid meteors are bits and pieces of space rock broken off from the Comer Swift-Tuttle.

The giant comet orbits the Sun every 133 years and the Earth approaches its dusty trail once a year.

NASA said: “Unlike most meteor showers which have a short peak of high meteor rates, the Perseids have a very broad peak as Earth plus through the wide trail of cometary dust from Comet Swift-Tuttle.”

When the Earth is closet to the orbit around mid-August, the shower peaks in intensity and the number of Perseid meteors.

Just bear in mind the number of shooting stars will start to dramatically drop off as we head further into August.

Robert Lunsford of the American Meteor Society explained: “The strongest Perseid rates this year are expected to occur on the Sunday night and Monday morning of August 12 and August 13, when the Earth is closest to the core orbit of comet 109P/Swift-Tuttle.

“If you cannot observe on that night activity will still be good on Sunday and Tuesday mornings.

“The further you watch from August 13, the weaker the display will be, especially after maximum activity.

“To view the Perseids successfully it is suggested you watch from a safe rural area that is as dark as possible.”

Once the Perseid meteors appear in the sky they break out in all sorts of directions imaginable.

Seasoned observers will note the Perseids appear to emerge from a point in the sky in the constellation Perseus.

But no matter which direction you look at the bright meteors are best seen when you simply allow yourself to absorb the sky fully.

Astronomers typically advise relaxing in a reclining chair in a quite and dark spot with unobstructed views of the sky.

Mr Lunsford said: “Some observers like to view toward the constellation Perseus and the radiant. This way they can see Perseid meteors travel in all directions.

“The disadvantage of viewing in this direction is that the Perseid meteors will be short, especially near the radiant.

“The other choice is to face away from the radiant and witness longer meteors, which are more impressive.

“Even if the radiant is at your back, you can still distinguish Perseid meteors from others as they will all travel in the same parallel paths and will have similar velocities.”

After the Perseids wrap up towards the end of August, astronomers will have to patiently wait for the Orionid meteor shower in October.

The Orionids are not as spectacular as the Perseids and only produce between 10 and 20 meteors during the peak.

The next major shower will not occur until December when the Geminids peak around December 14.

The Geminid shower is the biggest and most intense shower of the year, producing between 100 and 120 meteors every hour during the peak.

The Orbit of a Sun-Like Star Reveals The Nearest Black Hole Ever Found : ScienceAlert
We Have Our First Look at Neptune’s Rings in 33 Years, And They’re Glorious : ScienceAlert
Scientists Don’t Know What to Do With This Weird ‘Blue Goo’ Ocean Organism : ScienceAlert
One of The World’s Largest Organisms Is Disintegrating. Here’s How We Might Save It. : ScienceAlert
The Frogs Vanished, Then People Got Sick. This Was No Harmless Coincidence. : ScienceAlert