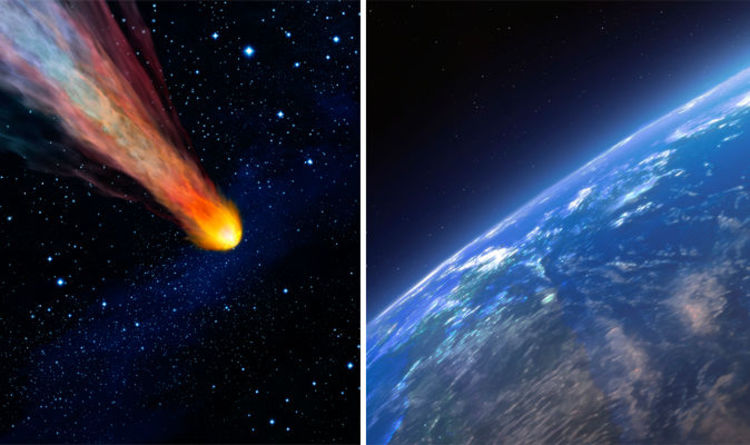 
Shooting stars are created when meteorites fall towards Earth, hitting the atmosphere causing the rocks to look as if they are exploding on entry.

Scientists were unsure why this happened, but research from the Atmospheric and Planetary Sciences at Purdue University may hold the answers.

Researchers found meteors explode because high-pressure air seeps into the cracks of the rock, pushing the meteor apart and causing it to explode.

This will be evident when Earth travels through the dust cloud of the Swift-Tuttle comet, and the thousands of meteors hit our atmosphere in the Perseid meteor shower this weekend.

Jay Melosh, a professor of Earth, Atmospheric and Planetary Sciences at Purdue University, said: “There’s a big gradient between high-pressure air in front of the meteor and the vacuum of air behind it.

“If the air can move through the passages in the meteorite, it can easily get inside and blow off pieces.”

Prof Melosh’s team looked at the Chelyabinsk incident for their study.

In 2013, a 20 metre meteor exploded over the Russian city of Chelyabinsk which smashed windows and caused injuries to more than 1,000 people.

The meteor weighed around 10,000 tons, but only about 2,000 tons of debris were recovered, leaving experts to question as to what happened to make the rock disintegrate when it entered the atmosphere.

The team used computer simulations to push air into meteors, which had the effect of causing it to explode and leaving a trail of fire.

Prof Melosh said: “Most of the computer codes we use for simulating impacts can tolerate multiple materials in a cell, but they average everything together.

“Different materials in the cell use their individual identity, which is not appropriate for this kind of calculation.”

The Perseid meteor shower will peak this weekend between the night of Saturday, August 11, and the morning of Monday, August 13.

It takes place when the Earth travels through the cloud of debris left by the Swift-Tuttle Comet.

Conditions this year are expected to be ideal thanks to the darkened New Moon keeping the skies dark though out the shower.