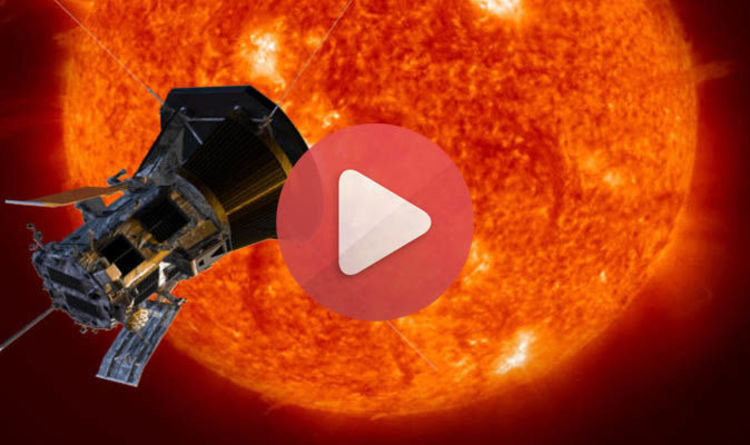 
Starting at 3.33am EDT (8.33am BST) on Saturday, August 11, NASA will set off on a seven-year-long mission to kiss the beating heart of the solar system.

The NASA Parker Solar Probe will blast off from the Kennedy Space Center in Florida, with live views from the launchpad broadcast here courtesy of NASA TV.

The monumental launch will kick off in the embedded live steam below starting at 3am EDT (8pm BST) tomorrow morning.

The Parker Solar Probe is a £1.17billion ($1.5billion) mission to deliver a man-made spacecraft to the Sun’s corona.

The US space agency teased: “NASA’s Parker Solar Probe is targeted to launch at 3.33am Eastern on Saturday, August 11, aboard a Delta IV-Heavy from Cape Canaveral Air Force Station in Florida.

“The spacecraft, about the size of a small car, will travel to the Sun’s atmosphere about four million miles from our star’s surface.

NASA’s online coverage of the rocket launch will include live video streams and blog updates as the launch countdown nears.

On-demand launch videos and photographs will be made shortly after liftoff.

NASA will attempt to blast from Florida during a brief 65-minute launch window which opens up at 3.33am EDT (8.33am BST).

On Wednesday, August 9, NASA’s engineers reported no technical issues standing in the way of the launch.

US Air Force meteorologists are also predicting a 70 percent chance of favourable weather conditions on the day of the launch.

Earlier in August NASA announced the Parker launch window was extended past August 19 until August 23.

On July 30 the Parker Solar Probe was securely moved inside its payload fairing to Cape Canaveral from the nearby Astrotech Space Operations in Titusville.

The delicate instrument comes equipped with an array of instruments and tools which will scan the Sun for solar winds and magnetic fields.

To shield the probe from the Sun’s intense heat and radiation, the Parker probe is armed with a novel carbon-composite shield.

You can read more about the NASA Parker Solar Probe’s incredible heat shield by clicking here.

It Turns Out There Is Such a Thing as Good Gossip, According to New Research : ScienceAlert
Long COVID Is Still Raising More Questions Than Answers, Say Researchers : ScienceAlert
Deep Brain Simulation Could Alleviate OCD When Other Treatments Have Failed : ScienceAlert
Superconductivity Model With 100,000 Equations Now Contains Just 4 Thanks to AI : ScienceAlert
Shimmering ‘Lakes’ Under The South Pole of Mars Might Be Something Else Entirely : ScienceAlert