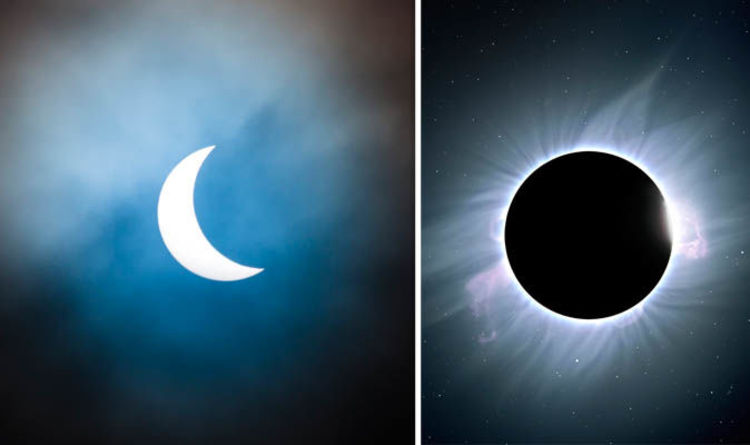 
The solar eclipse kicks off on Saturday, August 11, when the New Moon encroaches onto the glowing disc of the Sun.

The eclipse will start over the North Atlantic and Greenland around 8.02am UT (9.02am BST).

Once the eclipse starts, observers in Europe will see a dark circle slowly bite into the Sun, partially obscuring it from view.

But watching the eclipse tomorrow is a bit more complicated than simply looking up at the skies.

Depending on your location, the amount of Sun eclipsed but the Moon will vary to great degrees.

From the Norwegian island of Svalbard for instance observers will see about 57 percent of eclipse coverage.

But at no point during the eclipse will it be safe for you to look at the burning face of Sun.

Just like staring at a total solar eclipse can permanently scar your eyes, partial eclipses can be just as damaging to your eyesight.

It is never safe to look at an eclipse without proper protection, filter glasses or other safety apparatus.

NASA’s eclipse experts explained: “Even during a partial eclipse, when only a very small part of the Sun is visible, viewing it without eye protection risks permanent eye damage or blindness.”

The US space agency recommends a number of safe methods to watch the partial eclipse, such as the use of filters and projection.

Projecting a solar eclipse involves punching a tiny hole in a bit of cardboard and holding it just a few feet away from a white screen like a large piece of paper.

The pinhole opening projects an image of the Sun onto the screen, following the basic principle of a pinhole camera or camera obscura effect.

On the odd occasion NASA said you might be able to project an image of the eclipsed Sun on the ground by simply letting light through the gaps in your interlaced fingers or the leaves of a tree.

But for a clearer and better view of the Sun you should invest in a pair of special filter glasses or a filtered telescope or binoculars.

NASA said: “The Sun can be viewed directly only when using filters specifically designed for this purpose.

“Such filters usually have a thin layer of aluminium, chromium or silver deposited on their surfaces.

“One of the most widely available filters for safe eclipse viewing is a number 14 or darker welder’s glass.”

Be sure to check in with your local astronomy club to find out if they have any filtered telescopes you could use to look at the eclipsed Sun through.

But if you were hoping to stay in bed on Saturday morning rather than head out to see the eclipse, you might be wondering if there are any astronomical live streams of the event.

Unfortunately due to small eclipse coverage and limited area of visibility it appears as though there will be no eclipse broadcasts to watch tomorrow.

At the peak of the 2017 solar eclipse more than four million people watched the eclipse online on NASA’s free live steam of the event.

Tomorrow, eclipse-hunters will have to rely on their well-protected eyes to watch the partial eclipse.