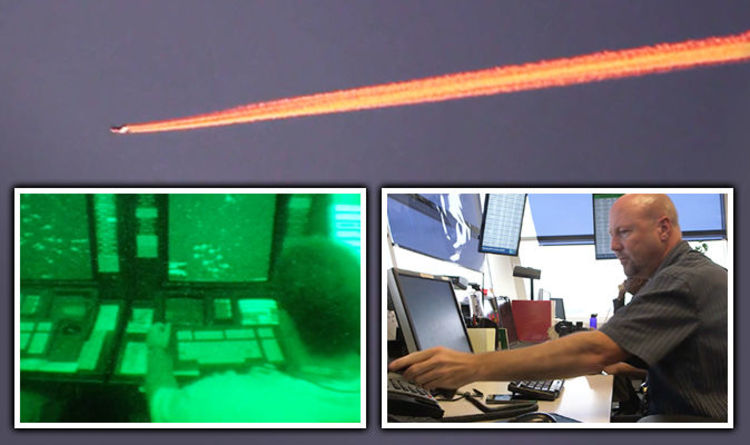 The white object was first spotted on radar before there were a series of eyewitness accounts from commercial pilots flying north over Oregon.

Express.co.uk reported on the incident at the time, after it apparently became invisible to radar and US Air Force (USAF) F-15 fighter jets were unsuccessfully scrambled to intercept it.

Now, video and audio recordings of the radar operators, who remain baffled by what they saw, after been released under the Freedom of Information Act.

They were obtained by Thedrive.com which said: “We present what could be one of the most insightful instances of official documentation surrounding such an encounter that had already been confirmed to have occurred by both the Federal Aviation Administration (FAA) and the USAF.

“These materials include fascinating audio recordings of radio transmissions and phone calls made as the incident was unfolding, as well as pilot interviews, and conversations between FAA officials made in the aftermath of the highly peculiar incident.”

The object was first detected on radar blasting across Northern California at high speed, at around 4.30pm local time, before taking a sharp north turn and merging with commercial air craft when it disappeared from radar.

Witnesses were left questioning where the jet may have come from and what it was doing.

Sightings continued over hundreds of miles for about half an hour.

The same description of a white aircraft at around 37,000 feet, that was too far away to tell its type or any markings, kept coming back.

When the F-15s are scrambled about 27 minutes into the video, radar contact has been lost.

FAA radar operatives had no idea what the craft was or where it went.


Wow that’s weird – it should be classified as potentially significant.


As they appear on radar climbing out of Portland an air traffic controller says they still “have nothing on him,” and it must be “in a kind of stealth mode or something”.

North American Aerospace Defence Command confirmed it had been asked by the Federal Aviation Administration to help track the unidentified aircraft flying at heights regularly used by commercial aircraft – 35,000ft and 40,000ft – on October 25.

No flight plan had been submitted for the unidentified craft and no identification transponder was active.

The craft was not transmitting collision avoidance signals. The F-15C Eagle interceptors have some of the most advanced combat search and tracking radars in the world.

The incident left people wondering what the object could have been.

In recordings of calls made after the incident, one operator is heard to say there was “definitely something out there”.

Another says it “executed an abrupt maneuver and took off northbound.”

While a third is heard to say: “I have a feeling someone is going to go through this with a fine-tooth comb.”

The pilot of a Southwest 4712 says he has never seen “an incident like it in nearly 30 years of flying jets”.

He said: “If it was like a Lear (private jet) type airframe I probably would not have seen it this clear.

This was a white airplane and it was big. “And it was moving at a clip too, because we were keeping pace with it, it was probably moving faster than we were… It was a larger aircraft yeah.”

One FAA Quality Assurance Group official is heard to say “wow that’s weird” and it should be classified as “potentially significant”.

She said: “It is a weird enough thing that there is not a set procedure… It’s not often we hear about an unknown guy up at that altitude.”

Military officials have been unable to identify the plane’s origin or even destination, after it vanished and they were not able top trace it.

Oregon borders Nevada, which is home to the mysterious and top-secret Area 51 US Air Force base where tests are conducted on new experimental craft.

In a debate on Reddit, some users speculated the object could be an alien UFO.

One posted: “A literal UFO.” Another said: “I live in Eugene and I see UFOs all the time. “Whether it be day or night. I could tell some interesting stories to say the least.

“Eugene seems to be a hot bed of activity… Keep your eyes on the sky.”

A third added: “Central Oregon here. I could say the same thing about the things we see over here.

Definitely weird.” A fourth Reddit user, who claimed to have been a pilot in the air at the time, said: “Strange! My theory is they were running drugs to Canada. No news yet, not that I could find.”

He described how airliners had been asked to help track an unknown white-coloured aircraft visually for up to 30 minutes as air traffic control radar was having difficulty getting a fix.

While it was in sight of various airliner crews, it was apparently never close enough for its type to be identified.

The alleged pilot added: “The last aeroplane to see it had to descend into Portland and lost sight of it.

“The fighters were scrambled out of Portland but flew around for a while and did not find it. “And that’s that.”

The event has similarities to US Navy pilot footage which emerged late last year of the 2004 Nimitz UFO incident.

An object that UFO investigators have said “defied physics” was caught on radar camera and seen by many witnesses.

The case was investigated by the Pentagon’s top secret Advanced Aerial Threat Identification Program (AATIP), which ran from 2007 to 2012. Details of the £16 million project only emerged in December when its former head Luis Elizondo resigned to work on a new UFO research project.

Sceptics argue that because something cannot be identified, it does not mean it is being flown by aliens.