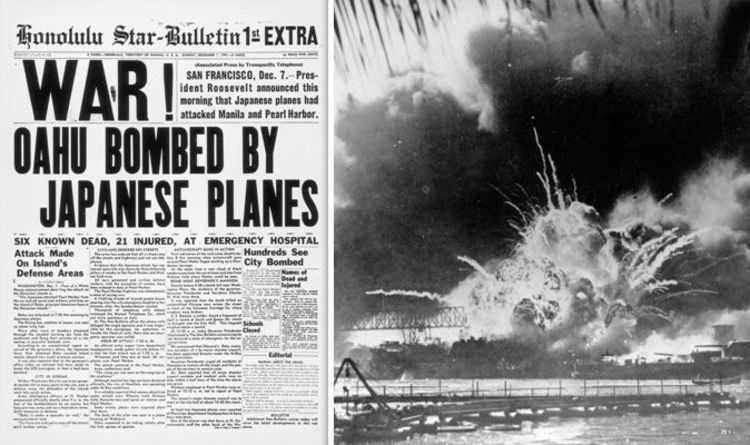 Pearl Harbor suffered one of the most catastrophic attacks in US history on this day in 1941. 2,400 lives were lost and the US Pacific Fleet was crippled in the devastating attack from Japanese forces, which came in two waves and lasted for just two hours. Blame was pinned on Admiral H Kimmel, Commander in Chief of the Pacific Fleet, stationed in Hawaii.

He faced the charge of dereliction of duty, and had to explain why he was so unprepared for the surprise attack.

However, 2016 documentary “Pearl Harbour: The New Evidence” outlines several ways in which the White House actually had evidence of the impending attack but never acted upon it or communicated it to Kimmel.

The first sign of the coming strike came when US intelligence intercepted an ominous message from Tokyo to the Japanese embassy in Washington.

They indicated November 25, 1941, would be a deadline, after which something would be inexorably put into action.

Pearl Harbor suffered one of the most catastrophic attacks in US history on this day in 1941 (Image: Getty)

That was the date on which the Japanese Navy secretly set sail to attack Pearl Harbor.

Then, more Japanese intelligence was intercepted the day before the attack.

13 parts of a 14-part message came through from Tokyo to its embassy in Washington on Saturday December 6.

They made it “clear that diplomatic relations are about to end between the United States and the Empire of Japan,” yet Kimmel was not informed of these messages.

Japanese aviators about to depart for the Pearl Harbor attack in 1941 (Image: Getty)

On the Sunday morning, the final and critical 14th part of the message came through.

“That 14th part doesn’t specifically say the word war but that is the unambiguous meaning of it to everyone who reads this message,” says former CIA analyst Mark Stout.

“You are to deliver these 14 messages to Washington at one o’ clock Washington time on December 7.”

The key time of 1pm would be 7.30am in the Pacific “perfect for an attack on Pearl Harbor.”

The Japanese message continued: “Once you get this part, destroy your code machine, you’re not going to need it anymore.”

“That is the universal signal for the start of a war,” says Naftali.

However, Chief of Naval Operations Admiral Stark “didn’t seem at all perturbed,” and chose not to notify the Navy in Hawaii.

With only 70 minutes left to warn Pearl Harbor, a naval officer managed to draft a war warning for Hawaii, however radio transmissions broke down that day.

A telegram was delivered and finally placed in Kimmel’s hands – eight hours after the attack had started.

“It hadn’t even been marked priority,” says historian Robyn Swann.

He worked for the British spreading disinformation in Nazi Germany, and MI6 turned him over to J Edgar Hoover, head of the FBI.

Popov brought Hoover a vital piece of intelligence – a list of research questions that Nazi commanders drew up for Tokyo.

The questions were cleverly concealed as microdots inside an official telegram, and included direct queries about Pearl Harbor.

Tokyo wanted to know about the water depth and whether the US had torpedo nets in place.

The attack propelled the USA into World War 2 (Image: Getty)

“Popov had evidence of Japanese intentions, but this was far beyond the FBI’s understanding,” says Prof Naftali.

“They don’t pass on the information to Kimmel, instead the FBI get obsessed with the microdot technology,” adds British military historian Andrew Robertshaw.

New evidence presented in the documentary shows that Washington also had crucial information about Japanese torpedo capabilities which was never passed on to the fleet commander.

Cannabis For Pain Relief? Review of 20 Studies Provides Sobering Results : ScienceAlert
Oldest Known Dog Bone Hints Our Best Friends Were With Us Earlier Than Thought : ScienceAlert
Octopus Brains Evolved to Share a Surprising Trait in With Our Brains : ScienceAlert
10 Days After Its Launch, Orion Has Successfully Entered Lunar Orbit : ScienceAlert
The FDA Just Approved The Most Expensive Drug in The World : ScienceAlert