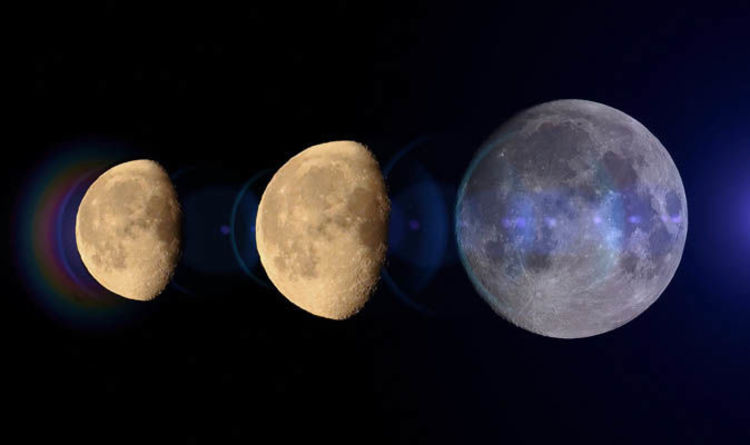 
The New Moon completely disappears from sight every month when the Moon and the Sun line up above Earth.

The longitudinal alignment of both bodies means the sunlit face of the Moon faces away from our planet.

During a New Moon, the lunar orb is effectively invisible to the naked eye for one or two nights at a time.

The New Moon phase occurs roughly every 29 days and is the stellar opposite of the Full Moon.

The Full Moon occurs at the end of the cycle when the Moon is 100 percent illuminated by the Sun.

The last Full Moon graced the skies on the night of October 24 – the so-called Full Hunter’s Moon.

And the October New Moon preceded it on the night of October 9.

So when will these two phases of the lunar cycle occur again?

When is the next New Moon phase in November?

The next New Moon is just two days away and the glowing lunar orb will vanish on Wednesday, November 7.

Tonight (October 5) the Moon is roughly five percent illuminated and appears to be nothing more than a crescent-shaped sliver of light – the so-called Waning Crescent.

When seen from London, UK, the New Moon will peak around 4.01pm GMT (UTC).

Keep in mind the New Moon will not be visible to the unaided eye.

When is the next Full Moon phase in November?

The next Full Moon will light up the skies on the night of Friday, November 23.

The Full Moon will peak around 5.39am GMT but you will be best able to see it in the afternoon hours.

The November Full Moon is sometimes referred to as the Beaver Moon because beavers in North America are believed to particularly active around this time.

Many Native American tribes gave names to the different phases of the Moon to keep track of time and the names were adopted by colonial Europeans.

What are the different phases of the Moon this month?

The various phases of the lunar cycle see the Moon grow from complete darkness to complete illumination in just around 29 days.

On November 15, the Moon will reach its First Quarter stage when the orb’s right side is 50 percent illuminated.

The Third Quarter phase of the Moon, when the left side is 50 percent lit up, will peak on November 30.

Crocodiles Seem to Be Thriving in a Toxic River That’s More Like a Sewer. Here’s Why : ScienceAlert
Chilling Glimpse Into Our Future if We Survive Another Million Years : ScienceAlert
Mysterious Tendrils Inside The Brain May Control Our Perception of Time : ScienceAlert
Do You Need to Drink Eight Glasses of Water a Day? It’s Complicated : ScienceAlert
Engineers Propose an Ambitious Plan to Bury Excess Carbon at The Bottom of The Ocean : ScienceAlert