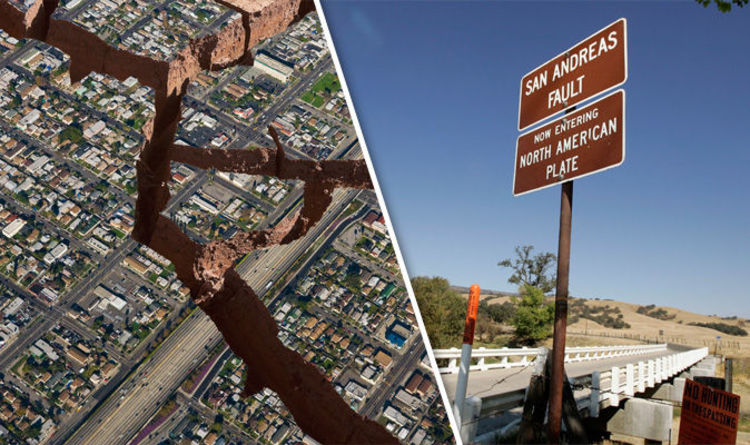 The strongest of the tremors registered at 4.1 on the richter scale, and while that is not powerful in itself, some believe it is a precursor of what is to come.

California is located on the Pacific Ring of Fire, the most geologically active region in the world.

More than 90 percent of earthquakes occur here, as well as 22 of the 25 biggest volcanic eruptions in history.

The state is also on the deadly San Andreas and Hayward Faults, and experts believe it is only a matter of time before the ‘big one’ hits.

And some believe Friday’s seismic activity, is a precursor to a huge tremor.

The prediction was made by ‘new-age earthquake’ forecaster website Ditrianum, run by researcher Frank Hoogerbeets.

Mr Hoogerbeets believes he can predict earthquakes using a Solar System Geometry Index (SSGI) which “is the computation of a dataset for a specific time-frame of values given to specific geometric positions of the planets, the Moon and the Sun”.

“This activity followed on seismic unrest to the South in the Gulf of California and further offshore Mexico.

“The next big quake in California or at the West coast in general will probably hit sooner than later.”

Mr Hoogerbeets does not give any indication when the earthquakes might occur however, but he predicts a tremor will register at around magnitude six, which “may cause a lot of damage in very populated areas”, according to Michigan Tech.

Oldest Known Dog Bone Hints Our Best Friends Were With Us Earlier Than Thought : ScienceAlert
A Strange Thing Happens to Wolves Infected by Infamous Mind-Altering Parasite : ScienceAlert
A Tobacco Plant Has Been Engineered to Produce Cocaine in Its Leaves : ScienceAlert
Chilling Glimpse Into Our Future if We Survive Another Million Years : ScienceAlert
Crocodiles Seem to Be Thriving in a Toxic River That’s More Like a Sewer. Here’s Why : ScienceAlert