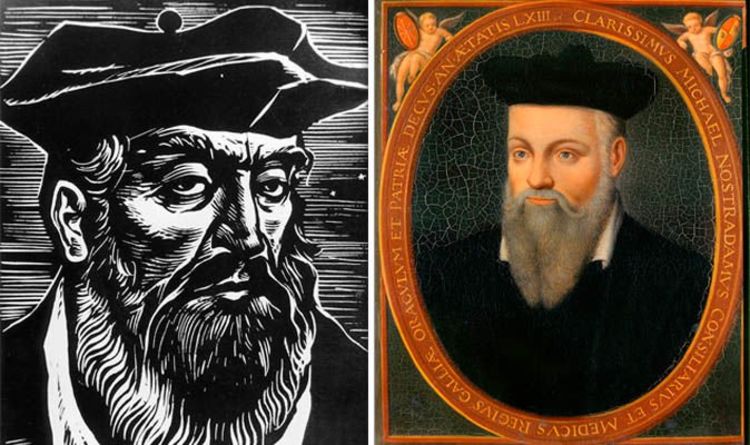 According to Nostradamus the dead will rise from their graves for the games of slaughter around the millennium, in the year of the 7th number.

Even so, researchers have prepared for the circumstance to play out in real life, as in 2016 the Centre for Disease Control published a pamphlet entitled ‘Preparedness 101 Zombie Pandemic’ which outlined the best course of action in a real outbreak.

And in 2015, Cornell University epidemiologists determined if the worst were to happen and the dead did awake from their graves, then head to Nevada where it should remain zombie free for four months.

Nostradamus said the earth will experience weather patterns like never before, with 40 days of flooding followed by 40 years of drought.

This prediction has not proved true, if we did have 40 years of drought, humans would only last a few days without water.

However weather across the globe is getting worse because of global warming and North America faces a 98 percent chance of so-called megadroughts between 2050 and 2099.

War between Persia and Macedonia

Persia no longer exists in the modern world, the last thing we would call the Persian empire would be the Qajar dynasty which dissolved in 1925.

Modern-day Persia is known as Iran but the reference to Macedonia is more vague, it could have referred to the Republic of Macedonia, which was formed out of former Yugoslavia, but it’s more likely to refer to the Macedonian region of Greece.

Going by data there’s nothing to suggest we’re at any more of a risk of seismic events that we’ve been before.

The frequency of quakes has stayed the same, at 15 earthquakes per year of magnitude 7 or greater.

China is considered the next world superpower and a quatrain seems to suggest that after the setbacks of the US civil war and the great famine, China is ready to reach the top but this not happened yet.

The US is still $7tn ahead of China’s $11tn economy and the average American produces two times the world average economic output.

However as lower class living standards in China improve it is only a matter of time until China eclipses the US as a word power.

Nostradamus predicted zombies would rise from their graves but this has not come true (Image: Getty )

World War 3 has been predicted many times in the past, and in 1981 it was claimed the third world war would start in 1994 and continue until at least 1999.

Recent prediction have come from a self-style clairvoyant and messenger of god, Horacio Villages, who claimed the war would begin on May 13, 2017 as a result of attacks on Syria.

Mabus is one of the most popular figures in Nostradamus mythology, but it is said he heralds the end of the world.

According to Les Propheties, Mabus’ death will cause a massive rout, vengeance and a comet run.

Many believers in Nostradamus conclude Babus is the third antichrist and some have even attached his name to a debunked list of world leaders, including Barack Obama, Saddam Hussein, George Bush and Osama Bin Laden.

The belief by Nostradamus is that there will be three antichrist figures, each of whom is a powerful and persuasive man that does great harm to the world.

Interpreters have concluded the first one of them was Napoleon, then came Hitler, who Nostradamus predicted as a poor child of Europe who would seduce a great troop with his tongue, which believers have attributed to the leader of the Third Reich.

People have pointed to world leaders as being the third antichrist, and at the moment, Donald Trump is a favourite, with commentators pointing towards the controversies of his office and a tumultuous global climate as evidence of him being the biblical beast.

Interpreters of Nostradamus have used current affairs to make claims with increasing frequency about the end times.

Rumours circulated based on the prediction that a great king of terror would arrive in the seventh month of 1999 and reanimate the King of the Mongols.

There is no real link from Nostradamus own writings to the supposed mayan apocalypse that never was but this quatrain was used as an extra cryptic sign.

Nostradamus predicted 1737 as the end point for his predictions.

A ‘Wormhole’ Built on a Quantum Computer Teleported Information as Predicted : ScienceAlert
Oldest Known Dog Bone Hints Our Best Friends Were With Us Earlier Than Thought : ScienceAlert
Mysterious Tendrils Inside The Brain May Control Our Perception of Time : ScienceAlert
Earth’s Oxygen Came From an Unexpectedly Deep And Hot Source, Study Suggests : ScienceAlert
Do You Need to Drink Eight Glasses of Water a Day? It’s Complicated : ScienceAlert