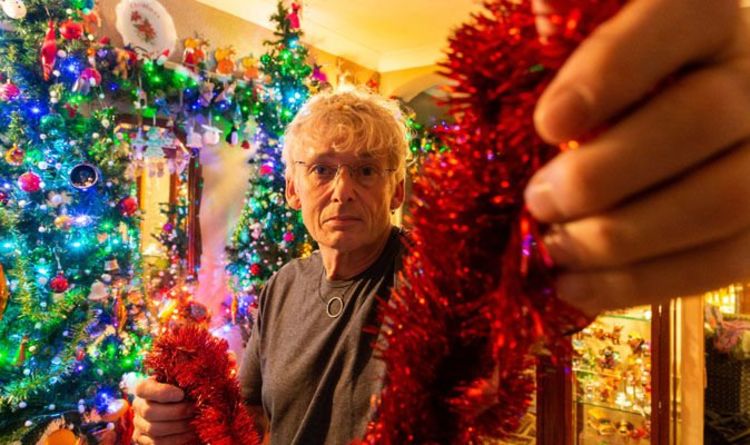 
Geoff Stonebanks, 65, is obsessed with Christmas and has nearly 4,000 baubles and 3,100 lights lavishly decorating his East Sussex home. The display, which takes almost a week to put up, includes a much-decorated ‘entrance hall’, themed rooms and a huge silver tree in the lounge as the centrepiece. The gardener from Seaford started the collection in the 1960s, and now has one of Britain’s biggest, including pieces that date back eight decades.

Although Mr Stonebanks loves Christmas, he admits his partner of 18 years, Mark Glassman, 58, finds the month-long display “depressing” and avoids spending time at their home. He said: “He goes to work and stays out. He’s just got to sit through it.”

“I love Christmas, but my partner hates it, although he has to tolerate my decorations. It takes a week of full-time decoration to erect them all and the tree in the living room takes a day on its own.”

The festive fanatic’s obsession began as a child, where he was tasked with decorating his parents’ pub, The Dolphin, in rural Oxfordshire.

“I’m a child at heart to be honest. It just started when we lived in a village pub and had a regular clientele I suppose. During the run up to Christmas having broken up from school, I was bored and my mum used to do it and I decided to take over from her.”

He remained in charge of the countryside pub’s decorations until his parents retired in 1987.

But Mr Stonebanks began compiling his own collection from 1979, when he bought his own house.

The selection features decorations from across the globe, including antique pieces from 1930s Prague, wooden ornaments from America and hundreds of contemporary ornaments from former high street favourite Woolworths.

He said: “There’s a whole collection of wooden decorations from America, a lot of glass and some from the 30s, 40s and 50s, it’s a lot of money.

“I generally buy more contemporary ones year on year.”

The decorations are taken down on January 1, being stored in 25 crates and two large boxes.

Mr Stonebanks said: “By New Years Day we’ve had enough as they’ve been up since December 1.”