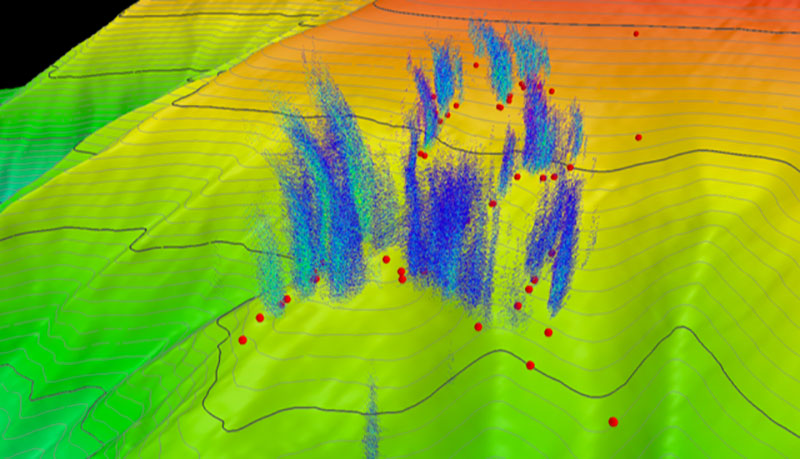 
Deep-sea explorers investigating a spot 39 miles off North Carolina’s Outer Banks found a gigantic field of methane bubbling out of the seafloor.

The bubbles of methane, seeping “continuously and others turning off and on over periods of less than a minute,” were discovered off Bodie Island, at a depth of about 1,300 feet.

In some spots, the bubble plumes are plentiful enough to resemble florescent lace curtains in the glow of a camera deployed by NOAA Ocean Exploration and Research.

Adding to the spectacle: The bubbles rise amid “dense” beds of mussels that are seen in a video stretching as far as the camera lens could penetrate.

The bubbles are methane gas, seeping constantly from the ocean floor off Bodie Island, at a depth of about 1,300 feet, according to a report by the NOAA-backed team.

Evidence of a “seep field” off the island was first detected on sonar in 2012, but the expedition this month marked the first time visual proof was established that the seeps remains active and plentiful, officials said.

“These methane seeps had never before been visited … and scientists were excited to watch as (a camera) made new discoveries during its progress up the ridge,” noted a report by marine and geology experts.

Among the surprises was an abundance of sea life in the extreme environment, including spider crabs, quill worms, sea stars, anemones and several fish species, the report said.

Cold seeps like the one off Bodie Island occur at sites on the ocean floor where fluids like methane and sulfides escape from the seafloor, according to NOAA. Similar seeps are found throughout the ocean, including off South Carolina’s coast, NOAA says.

However, the gases are not considered a danger to the nearby Outer Banks or to boaters who frequent the waters above the seeps, according to Carolyn Ruppel, chief scientist for the U.S. Geological Survey’s Gas Hydrates Project.

“The methane from these seeps does not reach the surface of the ocean,” she told McClatchy newspapers.

“Methane emitted from the seafloor at more than about 300 feet water depth dissolves in the surrounding ocean, and the methane never reaches the sea surface in bubbles. The Bodie Island seeps are much deeper than 300 feet.”

Carbon dioxide is what reaches the surface. The methane may also “slightly affect the acidity of the water,” she said.

Among the things scientists are continuing to study off the East Coast is interaction between the seep areas and sea life. Anecdotal evidence suggests there is more life in such areas, particularly when it comes to crustaceans and the things that prey on them, Ruppel says.

“On the U.S. Pacific margin, ‘hot’ fishing zones have been shown to correlate with seafloor methane seeps in some locations,” she told McClatchy.