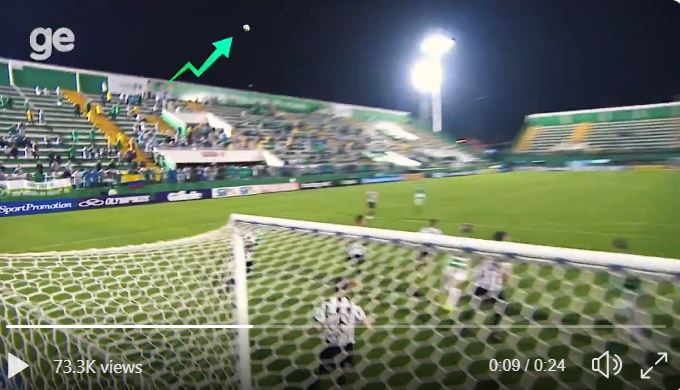 
Look at the trajectory of this ball…

It almost brakes the laws of physics…

During a Brazilian soccer game between Chapecoens and Atletico Mineiro, an incredible thing happened during a corner at the 41st minute of the second half.

Look at the ball trajectory again:

Yes, the ball changes direction during its flight… and nobody can tell how that just could happen.

The weird ball movement was noticed by three operators from Grupo Globo. They rejected the optical deception or camera defect version and noted that they had never seen it before.

In their opinion, this could have been due to gust of wind.

A professor of physics from the Federal Institute of Santa Catarina (IFSC), Alencar Millawacca, tried to decipher the physical phenomenon.

He first rejected the Magnus effect – a physical phenomenon that occurs when a fluid or gas flows around a rotating body, illustrated in this amazing science gif:

For the physician, an in-depth investigation of the video is needed. So he has actually no ideas of what’s behind the strange move!

What did the ball move from its trajectory?

Bacteria Can Use Plastic Waste as a Food Source, Which Isn’t as Good as It Sounds : ScienceAlert
Hypertension Drug Shown to Extend Lifespan And Slow Aging in Animals : ScienceAlert
Mysterious Medieval City in Africa Had a Genius System to Survive Drought : ScienceAlert
JWST Has Found Life’s Elemental Building Blocks in The Depths of Darkest Space : ScienceAlert
People Who Don’t Exist Look More Real Than Actual People, Study Finds : ScienceAlert