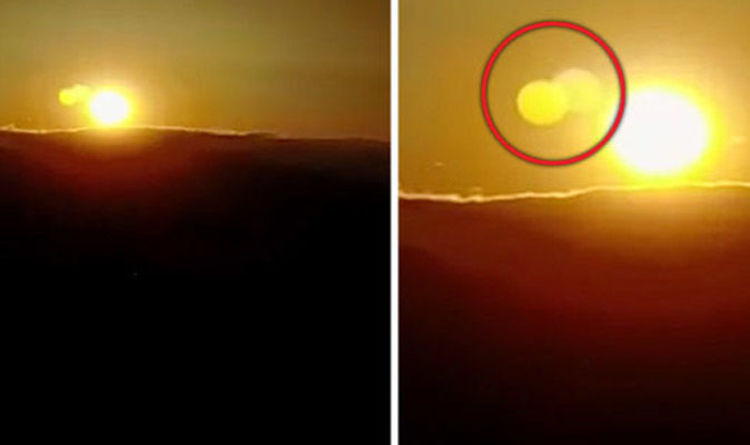 
Nibiru believers are convinced the “rogue system” is making its way from the outer solar system inwards, where it will wreak havoc on Earth as it passes at about four million miles away.

But a series of false alarm arrival dates have come and gone, with conspiracy theorists now claiming it will be later this year.

Now, a video has surfaced online that some claim could show the mythical planetary system appearing behind the sun.

In the clip, the narrator explains how he used a drone fitted with polarised lens to uncover the phenomenon, Dailystar.co.uk reports.

The camera pans round and we see the sun glowing bright in the distance.

But as the filter darkens, two other objects appear alongside.

The man claims one of them is apparently Nibiru, and it’s getting closer, alongside another planet from the legendary mini star system.

Some viewers were amazed.

One comment read: “This footage actually got my attention. They must be coming closer.”

And another simply added: “Wow amazing, but terrifying.”

The man behind the camera tries to suggest the “triple sun effect” cannot be a lens flare, or reflection, as it does not change when the camera moves.

However, Express.co.uk can reveal it is nothing more than a reflection of the sun itself inside the camera that is projected back onto the recorded image.

It is a common occurrence when a camera is aimed directly at the sun.

Previous similar reflections filmed on video have led to other false Nibiru videos being uploaded that were shared thousands of times.

Scott Brando, who runs debunking website Ufoofinterest.org said the reflections were caused by extra lenses being over the camera.He said: “It is a reflection of the sun using a multilayer glass that reflects the solar discs.”

The stunning footage was captured in Colorado, USA, on April 21st 2017, but has only just come to light after being posted online.

And, being filmed ten months ago, it is further evidence that no mythical planet is drawing nearer to Earth as it would have reached us by now.

The Nibiru myth emerged in 1976, when writer Zecharia Sitchin claimed that two ancient Middle Eastern cultures – the Babylonians and Sumerians – told of a giant planet – Nibiru – which orbited the Sun.

NASA insists that the conspiracy theorists are completely wrong, and the Nibiru myth is an internet hoax.

NASA scientist Dr David Morrison said: “There is no credible evidence whatever for the existence of Nibiru.