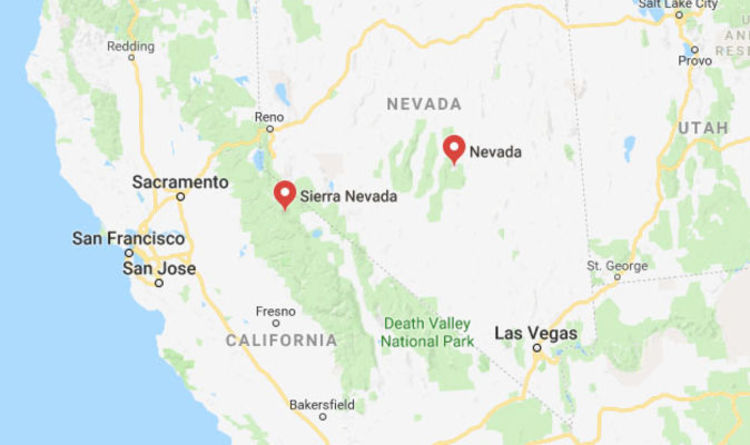 
The vast area of the western US that is made up of three points between the desert state and California – Reno, Las Vegas and Fresno – and equates to half the size of England. One of the most famous cases of a plane disappearing was of billionaire adventurer Steve Fossett, who had spent his whole life setting records as an experienced pilot. His single engine plane vanished on the California/Nevada border in 2007, leaving rescuers baffled. They eventually found two bones belonging to Mr Fossett and wreckage of his plane. But it begged the question of how such an experienced airman could plummet to the ground so suddenly.

Wreckage of his plane and his ID cards were found 65 miles away after the search expanded into 20,000 square miles of terrain in America.

Also found nearby where another eight aircraft that had also crashed flying over the Nevada Triangle.

Inside the 25,000 square mile triangle is the mysterious Area 51, which has triggered so many theories as to how the planes disappeared and why.

Some say the mystery surrounding the the Triangle is down to its strange geography and climate, which create unique atmospheric conditions which can rip aircraft from the skies.

A combination of fast-moving Pacific winds and steep mountainsides produces a phenomenon called the Mountain Wave, a roller-coaster effect that can send aircraft soaring up and then bring it crashing down to Earth.

In Mr Fossett’s case it is thought climatic conditions had created a 400mph downdraft. His aircraft could climb at a maximum speed of only 300mph. The difference meant he was doomed.

John Kelly, who has been flying in Nevada since 1974, said: “There’s potentially more crashes because of the atmosphere in the mountains, but I don’t think there’s a phenomena.

“It’s people flying over the mountains and misjudging the air pressure.” Other theories surrounding the Nevada Triangle are of government interference and even alien abductions.

It Sounds Crazy, But Walking Backwards Is Really, Really Good For You : ScienceAlert
Giant Asteroid Unleashed a Devastating Martian Megatsunami, Evidence Suggests : ScienceAlert
Colossal Discovery on Mars Could Drive Surging Magma Under The Surface : ScienceAlert
Humans Keep Growing an Extra Artery in Their Arms, And This Is Why : ScienceAlert
Some People May Make Extreme Snap Judgements About You Thanks to Face-ism : ScienceAlert