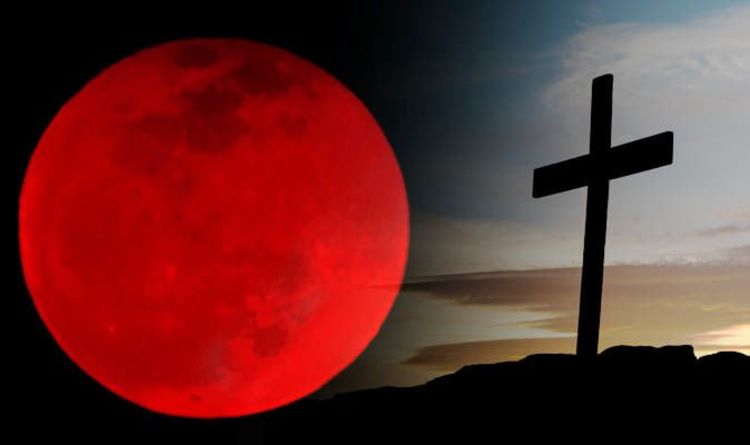 
The upcoming total lunar eclipse, often dubbed the Blood Moon, will paint the skies a menacing red colour over vast swathes of North and South America, Europe and parts of Africa. The Blood Moon is expected to peak on the night of January 21, 2019, marking the second anniversary of President Donald Trump’s inauguration. Biblical conspiracy theorists have now claimed the coincidental date is significant, with some going as far as to claim the world is coming to an end. Chief conspiracist, Evangelical Pastor Paul Begley from West Lafayette in Indiana, warned his followers the Blood Moon is a prophetic sign of the “end times”.

Pastor Begley is one of many doomsday preachers who believe Blood Moons are Biblical and apocalyptic signs from the heavens.

In his latest prophecy alert, Pastor Begley said: “I believe that this Super Blood Moon directly over the United States on the second anniversary of President Trump being sworn into office is a prophetic sign.

“It is going to be without a doubt a prophetic sign.”

Conspiracist like Pastor Begley point towards a few critical passages in the Bible which mention the Moon turning red.

The most commonly cited passage is found in the Book of Joel 2:31, where the Sun turns “into darkness” and “the moon into blood”.

An almost identical passage is written down in the Book of Acts 2:20.

Another Blood Moon reference is also found in the Book of Revelation which describes the Moon “becoming as blood” just before the end of the world.

Pastor Begley said: “Is this an omen? Is this a sign of things that will happen in those following two years?

“We will be the ones that will help protect Israel during their time when they are being accosted and being even attacked – coming under siege.”

But despite the doom-laden prophecies, the Blood Moon eclipse is nothing to fear.

READ MORE: January 2019 lunar eclipse: Is the Blood Moon in 2019 a sign of impending DOOM?

A Blood Moon eclipse happens roughly once or twice a year when the Moon crosses the centre of the Earth’s shadow.

When this happens, the lunar orb vanishes from sight only to reappear glowing a bright red to orange hue.

This change in colour is the result of scattered sunlight ending around the edges of the Earth and filtering out blue wavelengths of light, leaving red to fall on the Moon.

The scattering effect is known as Rayleigh scattering and is responsible for blue skies and red sunsets.

The last Blood Moon eclipse took place on the night of July 27, 2018, but was not seen from the US.

Earth’s Oxygen Came From an Unexpectedly Deep And Hot Source, Study Suggests : ScienceAlert
Engineers Propose an Ambitious Plan to Bury Excess Carbon at The Bottom of The Ocean : ScienceAlert
Psychologists Found a Weird Trick That Changes How Food Tastes : ScienceAlert
Massive Global Study Shows Belief in Witchcraft Is More Abundant Than You Might Think : ScienceAlert
Grim Study Shows 10 Years of ‘Carbon Offsets’ in California Had No Climate Benefit : ScienceAlert