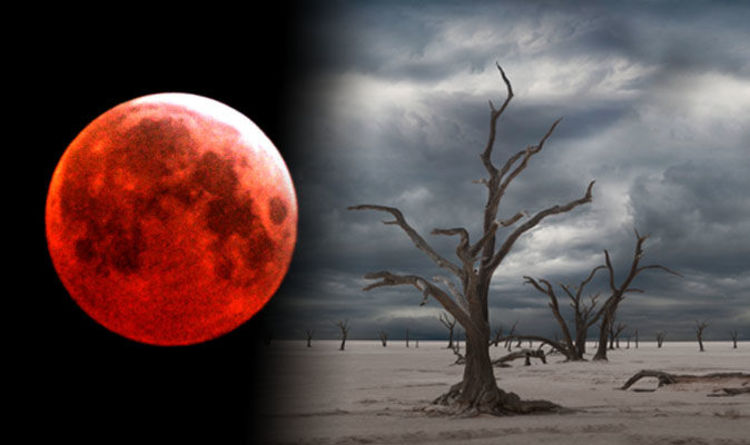 
A blood moon happens during a total lunar eclipse, when the Earth lines up between the moon and the sun, this hides the Moon from the sunlight. When this happens, the only light that reaches the Moon’s surface is from the edges of the Earth’s atmosphere. The air molecules from Earth’s atmosphere scatter out most of the blue light. The remaining light reflects onto the Moon’s surface with a red glow, making the Moon appear red in the night sky.

Is the Blood Moon in 2019 a sign of impending doom?

Some believe a blood moon is a direct sign from God and a biblical fulfilment of prophecy.

A blood moon is foretold in the biblical Book of Joel 2:31.

“The sun shall be turned into darkness, and the moon into blood, before the great and terrible day of the Lord come.”

Also in Acts 2:20: “The sun shall be turned into darkness, and the moon into blood, before the great and notable day of the Lord come.”

And, in the book of Revelations 6:12: “And I beheld when he had opened the sixth seal, and lo, there was a great earthquake, and the sun became black as sackcloth of hair, and the moon became as blood.”

Pastor Paul Begley believes the blood moon is a sign of the world coming to an end.

He said: “The Devils’ back has got to be breaking. It’s the birthing of the end times.

“We are living in the final days. It’s all about the super blue blood moon, it is a prophetic sign of the end times.”

When is the next Blood Moon?

The next total lunar eclipse, also known as a blood moon, is on January 21, 2019 and will be visible from the UK in the very early hours of the morning.

The Royal Museums Greenwich spokesperson said: “On 21 January 2019 a total lunar eclipse will be visible over most of North America, South America and parts of west and north Europe.

“The rest of Europe and African can witness the end of the eclipse.”

The spokesperson added: “During a total lunar eclipse, the Moon usually turns a deep, dark red because it is illuminated by light that has passed through the Earth’s atmosphere and has been bent back towards the Moon by refraction.”

The total phase of the eclipse will last about 1 hour and 2 minutes and the view will especially favour viewers on the West Coast.

NASA said: “North Americans, don’t worry. If skies are clear, you can see the next lunar eclipse on January 21, 2019.”

The Blood Moon will last about three hours and 17 minutes.

Later next year, on July 16, there will be a partial eclipse which happens on the 50th anniversary of the launch of the first moon landing mission, Apollo 11.

Astronomers See a Star’s Final Scream Into a Black Hole Halfway Across The Universe : ScienceAlert
A Strange Thing Happens to Wolves Infected by Infamous Mind-Altering Parasite : ScienceAlert
Astronomers Spot The Biggest Galaxy Ever, And The Scale Will Break Your Brain : ScienceAlert
Study Attempts to Unravel The Best Ratio of Land to Ocean For Exoplanet Habitability : ScienceAlert
Octopus Brains Evolved to Share a Surprising Trait in With Our Brains : ScienceAlert