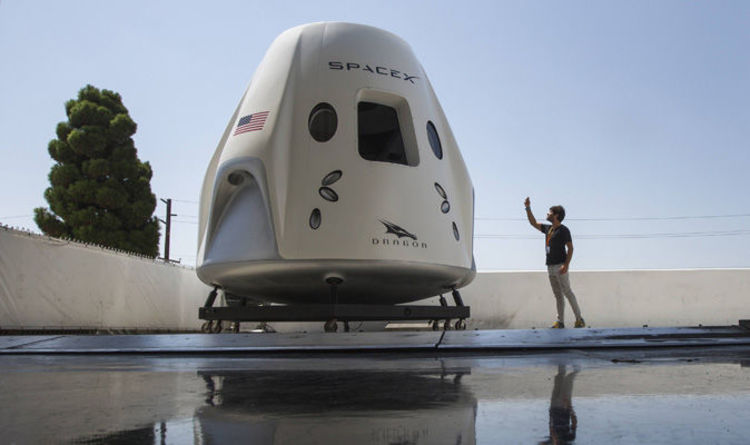 
SpaceX has offered the first look inside the stunning space capsule it will use to send NASA astronauts to the International Space Station next year.

The flight, which is part of NASA’s Commercial Crew Program, will mark the first manned flight launched from the US since the Space Shuttle program was shut down in 2011.

SpaceX plans to fly a two-person crew next April on the Crew Dragon, which will sit on top of a Falcon 9 rocket when it launches from Kennedy Space Centre.

It can stay in orbit for up to two years and can be reused to fly up to the International Space Station up to ten times.

The Dragon spacecraft can be launched with 13,288 pounds on board.

Dragon made history in 2012 when it became the first commercial spacecraft in history to deliver cargo to the International Space Station and safely return cargo to Earth.

At present, the Dragon only carries cargo to space but Elon Musk’s dream is for the spacecraft to carry humans.

The latest spacecraft has three configurations to meet a variety of needs: cargo, crew and DragonLab.

Crew Dragon will be a fully autonomous spacecraft that can also be monitored and controlled by onboard astronauts and SpaceX mission control in Hawthorne, California.

Crew Dragon has an Environmental Control and Life Support System that provides a comfortable and safe environment for crew members.

During their trip, astronauts onboard can set the spacecraft’s interior temperature to between 65 and 80 degrees Fahrenheit.

Crew Dragon was designed to be an enjoyable ride. With four windows, passengers can take in views of Earth, the Moon, and the wider Solar System right from their seats.

Deep Brain Simulation Could Alleviate OCD When Other Treatments Have Failed : ScienceAlert
Bitcoin’s Climate Impact Is Bigger Than Beef Farming – And It’s Only Getting Worse : ScienceAlert
Control of a 6-Qubit Processor in Silicon : ScienceAlert
Superconductivity Model With 100,000 Equations Now Contains Just 4 Thanks to AI : ScienceAlert
Narwhals Are So Weird, Scientists Used Chaos Theory to Explain Their Behavior : ScienceAlert