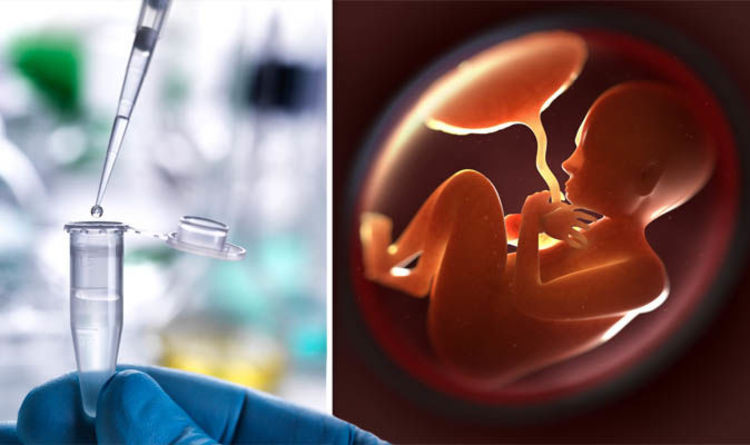 
Researchers at the Vienna University of Technology have fused a lab-made placenta-like membrane to a chip in a world first experiment.

The placenta is an incredibly complex and important membrane found between a mother and her unborn child.

The placenta protects the infant by filtering out harmful substances while allowing others to pass through with ease.

The Austrian scientists have now mimicked the natural processes that created the placenta with the help of novel, laser-based 3D printing process.

The researchers claimed the artificial material is the closest scientists have come to replicating the fundamental human organ.

Professor Aleksandr Ovsianikov, Institute of Materials Science and Technology in Vienna, said the placenta is a vital element of the human body.

The expert said: “The transport system of substances through biological membranes plays an important role in various areas of medicine.

“These include the blood-brain barrier, ingestion of food in the stomach and intestine, and also the placenta.”

The Vienna researchers replicated the crucial organ in a bid to further study how it operates under controlled conditions.

The artificially created membrane was created by populating a special hydrogel membrane within a microfluidic chip with placenta cells.

Denise Mandt, who worked on the project, explained: “Our chip consist of two areas – one represents the foetus, the other the mother.

“We use a special 3D printing process to produce a partition between them – the artificial placenta membrane.”

Scientists believe the manufacturing of micro-organs like this could revolutionise the medical industry.

Professor Peter Ertl, head of a cell chip research group crucial to the study, said: “This ‘organ-on-a-chip’ technology is a revolutionary approach to biomedicine, which has degenerated a great deal of interest in clinical diagnostics, biotechnology and pharmaceutics in recent years.”

The study was published in the International Journal of Bioprinting under the title of Fabrication of placental barrier structures within a microfluidic device utilizing two-photon polymerization.

The experiment comes after a team of stem cell researchers in the US succeeded at combining artificial human cells with the embryo of a chicken.

The unusual experiment helped scientists for the first time ever observe how certain cells in a developing embryo organise themselves into body parts.

Lead researcher Dr Ali Brivanlou, from Rockefeller University, said: “No one knew what happens after the ball of cells attaches itself to the uterus.”

In many countries such as the US, the use of embryos for research and experimentation is illegal past the 14-day mark.

Biology Inspires a New Kind of Water-Based Circuit That Could Transform Computing : ScienceAlert
Astronomers Think They Know The Reason For Uranus’s Kooky Off-Kilter Axis : ScienceAlert
Bitcoin’s Climate Impact Is Bigger Than Beef Farming – And It’s Only Getting Worse : ScienceAlert
Hubble And Webb Pics Reveal DART Impact Was Even Bigger Than Expected : ScienceAlert
These Are The Most Distant Star Clusters Ever Seen, And We Nearly Missed Them : ScienceAlert