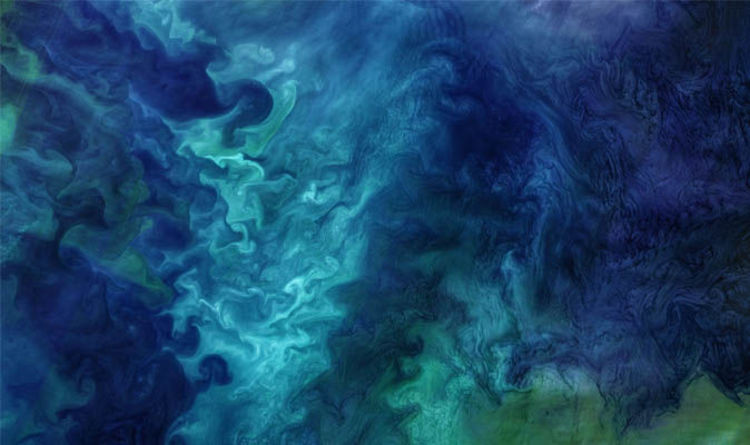 
The NASA photograph on display was snapped by the Operational Landsat Imager (OLI) on the Landsat 8 exploration satellite.

The photo is a mesmerising mix of swirling blue and green waters full of tiny seawater plankton.

Blooms of phytoplankton are a typical occurrence this time of year and usually come alive each Spring.

NASA said regardless of the amount of leftover winter ice cover over Chukchi Sea, the plankton will bloom into life.

The US space agency said in a release: “These blooms can form striking patterns of blue and green seawater, such as those visible in this image of the Chukchi Sea acquired on June 18, 2018, by the Operational Land Imager on Landsat 8.

“Blooms are a common occurrence this time of year. But the regularity of the blooms and their simple beauty belie the complexity of this ecosystem.”

The Chukchi Seas is a marginal stretch of seawater on the edge of the Arctic ocean, in between Alaska and Russia.

NASA said the Chukchi Sea is a mix of two main water masses, which create the right condition for the plankton to thrive.

One of these masses of water is the Bering Sea, which is cool, salty and rich in nutrients.

Waters from the Bering Sea fuel the plankton’s growth and encourage micro-organisms known as diatoms to paint the waters green.

NASA said: “The second mass of seawater is known as ‘Alaskan Coastal Water’, which is warmer, less salty and nutrient-poor.

“Diatom growth is usually lower in these waters but coccolithophores can do well here.

“Some areas pictured here could contain this type of plankton, known to impart a milky turquoise hue to the water with their plates of calcium carbonate armour.’

Coccolithophores are a unicellular from of plankton found in temperate, tropical and subtropical oceans.

NASA’s ‘Photo of the Day’ feature covers a wide variety of topics and pictures.

NASA showcases everything from beautiful vistas of the night sky, distant galaxies and satellite observation of Earth down to photos of astronauts, spacecraft and rocket launches.

One of The World’s Largest Organisms Is Disintegrating. Here’s How We Might Save It. : ScienceAlert
There’s Trouble Bubbling Up in Newly Formed Alaskan Lakes, And Scientists Are Worried : ScienceAlert
JWST’s First Glimpse of Mars Reveals The Red Planet in a New Light : ScienceAlert
We Have Our First Look at Neptune’s Rings in 33 Years, And They’re Glorious : ScienceAlert
Scientists Don’t Know What to Do With This Weird ‘Blue Goo’ Ocean Organism : ScienceAlert