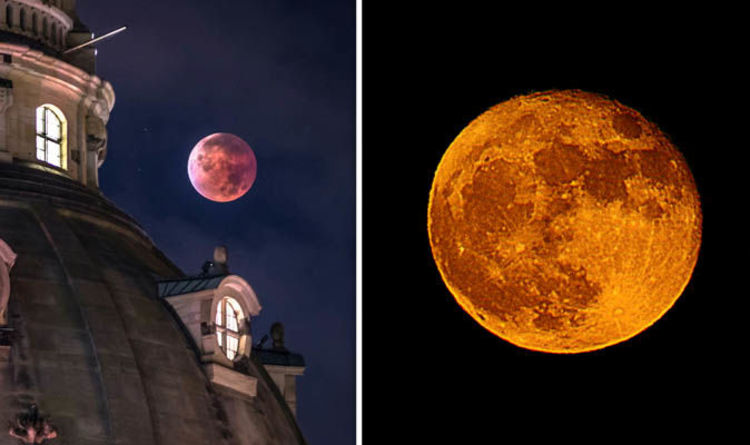 
The upcoming July full moon will completely dip into the Earth’s shadow on the night between July 27 and July 28.

The lunar passage will mark the total eclipse of the moon – a celestial event which happens about twice a year on average.

The total eclipse is also referred to as the Blood Moon because of the characteristic way the moon glows a reddish-orange colour.

From start to finish a lunar eclipse can last up to a couple of hours and this month’s eclipse promises to be the longest of the 21st century.

How long will the Blood Moon eclipse last?

NASA’s astronomers at the Goddard Space Flight Center expect the moon to spend a whopping one hour and 43 minutes in the Earth’s shadow.

This is close to the longest possible length of totality, which is one hour and 47 minutes.

The closest earth came to this was on the night of July 16, 2000, with a total lunar eclipse lasting one hour, 46 minutes and 24 seconds.

For comparison, the spectacular Super Blue Blood Moon combo on January 31 this year only clocked in at one hour and 16 minutes.

But from start to finish, additional partial and penumbral eclipsing of the moon means an eclipse could last up to four hours in total.

NASA estimates the whole run of the moon through the shadow on July 27 will last three hours and 55 minutes.

How does a total lunar eclipse happen?

Noah Petro, NASA’s lunar expert, said: “An eclipse is a unique event that happens a few times every year.

“It’s when the Earth, the moon and the sun are in perfect alignment.

“During a lunar eclipse the Earth passes between the moon and the sun and the Earth’s shadow is cast upon the surface of the moon so it looks like the moon disappears into darkness for a brief period of time.

“They’re special because they only happen a few times every year and you have to be in a very special location on the surface of the Earth to be able to see it, so not everybody gets to see an eclipse when it happens.”

Click here to find out if you will see the upcoming eclipse and where the Blood Moon will be visible.

The lunar eclipse will start everywhere at the same time but based on your location the exact moment you see it in the sky will vary.

For London, the initial stages of the eclipse and totality will, unfortunately, begin below the horizon.

But once the moon enters the evening sky it should already glow with a deep red hue.

Here are the start and end times for the Blood Moon eclipse, as seen from London.

The Blood Moon will likely rise over the UK shortly after maximum eclipse, after 8.30pm BST.

Over London the Blood Moon is expected to rise at 8.50pm BST and after midnight the moon will return to its normal white colour.

Amazing New Fossils Provide Earliest Known Traces of The Evolution of Our Jaws And Limbs : ScienceAlert
Termites Love Global Warming So Much That They May Make It Worse, Says Study : ScienceAlert
We Just Got Our Closest View of Europa in 20 Years, And We Can’t Stop Staring : ScienceAlert
Diamond From 660 Kilometers Below Earth’s Surface Reveals a Water-Rich Environment : ScienceAlert
Superconductivity Model With 100,000 Equations Now Contains Just 4 Thanks to AI : ScienceAlert