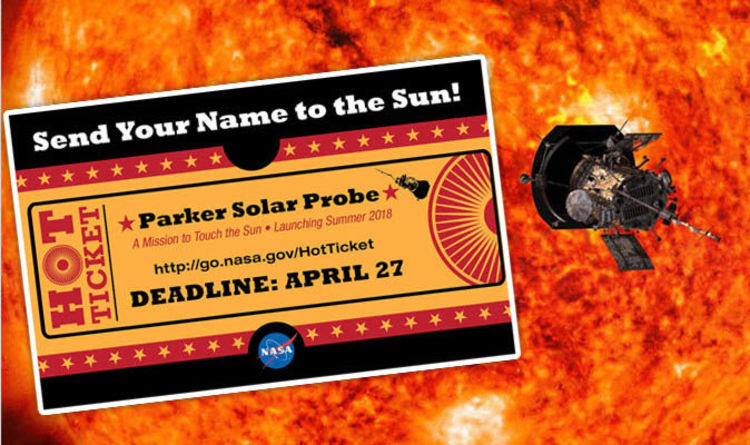 
The public have been invited to participate in what will be the single hottest event in the summer of 2018.

Launching later this year between July 31 and August 19, the Parker Solar Probe will barrel through the depths of space to orbit the burning star in the centre of the solar system.

And now you have been given the chance to join NASA for the ride.

Onboard the small car-sized spacecraft, the US space agency mounted a special microchip containing the names of everyone who signs up before April.

You can grab your “Hot Ticket” and add your name to the space mission by filling out the form here.

Star Trek legend William Shatner extended the open invitation to everyone on behalf of NASA, urging people to join the unprecedented mission.

He said: “Want to join NASA on a historic mission of discovery?

“The first ever spacecraft to the sun, NASA’s Parker Solar Probe, will launch this year on an orbit to course through the heat of our star’s corona where temperatures are greater than one million degrees.

“The spacecraft will also carry my name to the sun, and your name and the names of everyone who wants to join this voyage of extreme exploration.

“Parker Solar Probe is going to help us learn about how the sun works and how it affects life and technology here on Earth. Add your name.”

According to Thomas Zurbuchen, associate administrator for the Science Mission Directorate at NASA Headquarters in Washington, the space mission will go boldly where no one has ever gone before.

He said: “This probe will journey to a region humanity has never explored before.

“This mission will answer questions scientists have sought to uncover for more than six decades.”

NASA believes the mission is vital towards furthering our understanding of the stars and how they impact and sustain life in space.

The Parker probe will travel directly towards the sun, approaching its incredibly hazardous atmosphere about four million miles from the surface.

To protect the spacecraft from the intense heat and radiation of the star, a 4.5-inch-thick carbon-composite shield will cover the probe.

Project scientist Nicola Fox, of the Johns Hopkins Applied Physics Laboratory, said: “Parker Solar Probe is, quite literally, the fastest, hottest – and, to me, coolest – mission under the sun.

“This incredible spacecraft is going to reveal so much about our star and how it works that we’ve not been able to understand.”

The spacecraft will approach the heart of our solar system at breakneck speeds of around 430,000 mph.

Once the probe reaches the sun, it will study the star’s magnetic field, plasma and energetic particles and attempt to image solar winds at room temperature.

The main goal of the mission is to trace how heat and energy move through solar corona.

The American space agency underlined the mission will “revolutionise our understanding of the sun”.

NASA said: “Be a part of the first mission to touch the sun!

“Submit your name and it will be included in a memory card that will fly aboard Parker Solar Probe spacecraft.

“Come with us as we plunge through the sun’s atmosphere, closer to the surface than any spacecraft before it, facing brutal heat and radiation conditions—and ultimately providing humanity with the first-ever close-up view of a star.”

How a Dead Girl in Paris Wound Up With The Most-Kissed Lips in All of History : ScienceAlert
We Used to Hate Commuting. Now We Realize We’ve Lost Something. : ScienceAlert
Human Brain Organoids Transplanted Into Rats Just Passed a Major Milestone : ScienceAlert
What Can They Actually See? : ScienceAlert
Ultra-Processed Food May Exacerbate Cognitive Decline, New Studies Show : ScienceAlert