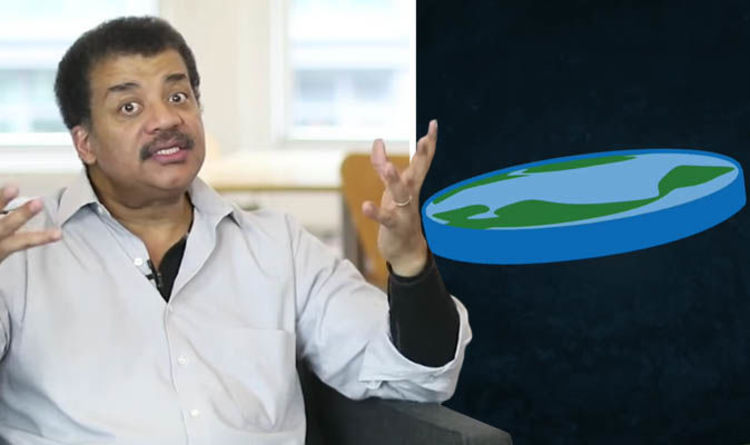 
Neil deGrasse Tyson, famed astrophysicist and television host, has confirmed the long held belief Earth is indeed round and not flat.

Appearing online in a YouTube video posted on the StarTalk channel, Mr Tyson vented his outrage and debunked the Flat Earth myth.

Unamused by his co-host Chuck Nice’s question about the shape of the Earth, the vexed scientist said: “We have video from space of the rotating, spherical Earth. The Earth is round.”

The Flat Earth Theory is an old and obviously debunked belief the world is not spherical, but rather a flat disk surround by a towering barrier of ice.

Believers of the bunkum theory, commonly referred to as Flat Earthers, claim to rely on their own senses and observations rather than empirical scientific data.

Many Flat Earthers have accused leading scientific bodies like NASA of deceiving the public about Earth’s shape.

But Mr Tyson now expressed his confusion when faced with the number of people who still subscribe to the theory.

The physicist said: “What is odd, is there are people who think Earth is flat but recognise that the Moon is round, Mercury, Venus, Mars, Jupiter, Saturn, Uranus, Neptune and the sun are all spheres.

“But Earth is flat. Something doesn’t square.”

He then went on to explain why the vast majority of stellar objects in the observable universe are all round, and only occasionally appear to be flattened.

According to Mr Tyson all the known laws of physics and processes in space “favour the sphere”.

He said: “And if something is not a sphere and is a little flattened, you can ask what flattened it, and you find out it’s rotating real fast.

“So then it gets a little flattened because of that. So almost everything in the universe is either a sphere or light distortion of a sphere, for some other things happening to it.

“We can just see how the universe favours spheres.”

But then why do so many people still believe the world is flat? A lot of it comes down to the fundamental problems with free speech, Mr Tyson argued.

Mr Tyson blamed the scores of people who truly believe the Earth is flat and spout their false theories to others without consequence.

The physicist also criticised the American schooling system, saying it does not teach people to think critically.

He said: “Our system needs to train you not only what to know, but how to think about information and knowledge and evidence.

“If you don’t have that kind of training you would run around and believe anything.”

The Flat Earth Society claims to encourage the spread of ideas and free thought since at least 1865.

Though it is often assumed to be a joke or a spoof organisation, the society considers itself to be a serious movement.

The group says on its website: “Flat Earth Theory has grown over the centuries like a wondering sojourner hungry for truth and eager for discovery.

“It’s changed from the learned conjectures by our ancestors of Antiquity to Victorian polymaths like Dr. Samuel Birley Rowbotham, and it even thrives today in a world-wide grassroots effort of scholarship.

“As people walked through the ages collecting data and knowledge, the Flat Earth Theory walked with them, growing wise and robust in kind.”

Newly Discovered Fossil Reveals Hundreds of Teeth ‘Never Seen Before in a Pterosaur’ : ScienceAlert
Babies May Not Be Born With a Microbiome After All, Scientists Say : ScienceAlert
Hypertension Drug Shown to Extend Lifespan And Slow Aging in Animals : ScienceAlert
Scientists Create Shapeshifting Humanoid Robot That Can Liquefy And Reform : ScienceAlert
Viagra Linked to Much Lower Risk of Death in Men, But Questions Remain : ScienceAlert