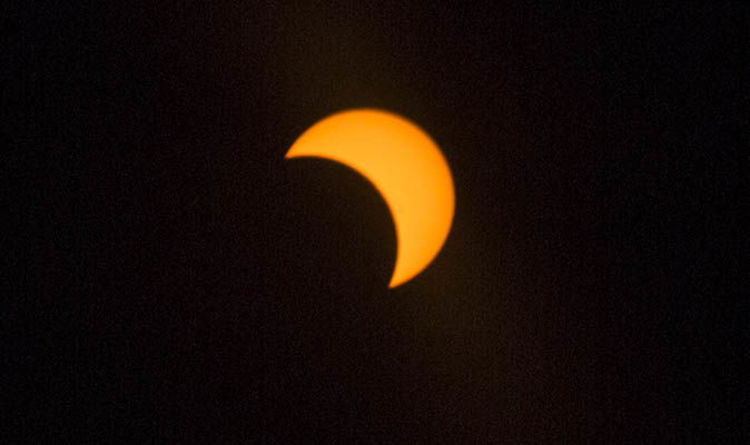 
The next partial solar eclipse is on Saturday, August 11.

A partial solar eclipse happens when the Moon, Sun and Earth do not align in a perfectly straight line and the Moon casts only the outer part of its shadow, the penumbra on Earth.

The last partial solar eclipse appeared on July 13, although it was only visible over the ocean between Australia ad Antarctica.

What time is the solar eclipse?

The August 11 partial eclipse will be visible in many countries in the Northern Hemisphere, although not in the US.

The eclipse will begin over the North Atlantic Ocean and Greenland, before heading toward Iceland, northern Europe, most of northern Russia and part of northern China.

The eclipse will officially begin at 9.02am BST (8.02am UTC) when the moon first appears to make contact with the sun’s disk.

The wide path of this eclipse means more people will be able to catch it, compared to the July 13 partial solar eclipse.

But stargazers should make the most of this eclipse as it is the last eclipse – lunar or solar – of 2018.

A unique aspect of partial eclipses is that the sun is closest to the horizon at the point of the greatest eclipse.

This is the reason why the areas where you can see a partial eclipse tend to be near the poles.

Eclipses happen approximately every 173 days during what is called an eclipse season.

According to NASA, twice a year, the moon’s orbit crosses paths with the sun’s orbit for 34 days when up to three eclipses can happen.

The first eclipse of 2018 was the super blue blood moon on January 31, but the first partial solar eclipse was on February 15.

This was followed by two eclipses during the month of July.

The August 11 partial eclipse marks the end of the eclipse season, the next eclipse will not be until January 21, 2019 which is also a supermoon.

According to NASA, the moon will cover approximately 73 percent of the sun when the eclipse is at its peak.

Stargazers will need special eclipse glasses to get the best viewing experience and to protect your eyes.

Partial solar eclipses can be very dangerous to look at with the naked, eye, accordion to the American Astrological Society (AAS).

The AAS recommends getting special-purpose sun filtering glasses and not looking at the sun through binoculars, a camera lens or a telescope even with the eclipse glasses on because of the strength of the sun’s light.

‘Dark Data’ Is Leaving a Huge Carbon Footprint, And We Have to Do Something About It : ScienceAlert
Bitcoin’s Climate Impact Is Bigger Than Beef Farming – And It’s Only Getting Worse : ScienceAlert
The Pacific Is Destined to Vanish as Earth’s Continents Meld Into a New Supercontinent : ScienceAlert
It Turns Out There Is Such a Thing as Good Gossip, According to New Research : ScienceAlert
Weight Lifting in Old Age Does More Than Just Keep Your Muscles Strong : ScienceAlert