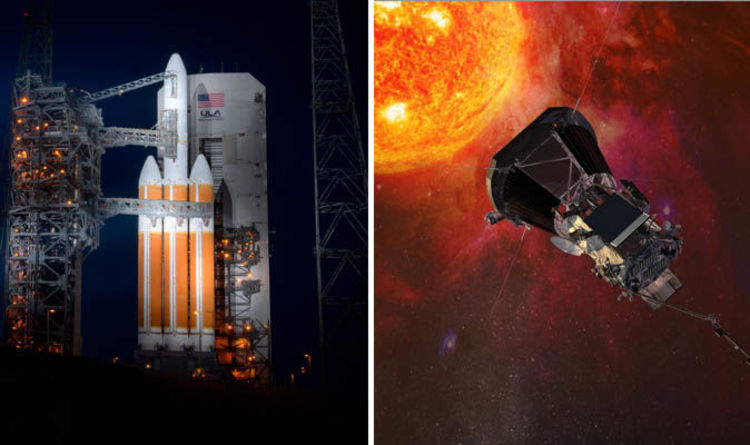 
In the final moments before the historic launch, a gaseous helium pressure alarm was raised on the spacecraft causing this morning’s launched to be cancelled.

The launch window for today was already close to expiring and there was not enough time to evaluate the problem.

Mic Woltman from the NASA Launch Services Program said: “Teams worked very hard this evening, diligently getting through the launch process and looking at everything they had to in order to get into the terminal count.

“As we picked up the count and got into t-minus 4 minutes, the team received a gaseous helium red pressure alarm.

“That kicked them [the team] out and now the team is looking and evaluating that but unfortunately there wasn’t enough time this evening to troubleshoot that for a launch.”

NASA shared on their live blog: “The launch of a United Launch Alliance Delta IV Heavy rocket carrying the Parker Solar Probe spacecraft was scrubbed today due to a violation of a launch limit, resulting in a hold.

“There was not enough time remaining in the window to recycle.

“The launch is planned for Sunday, Aug. 12 from Space Launch Complex-37 at Cape Canaveral Air Force Station. The forecast shows a 60 percent chance of favorable weather conditions for launch. The launch time is 3:31 a.m. EDT.”

NASA had predicted a 95 percent chance of favourable weather conditions for this morning’s launch.

The object was meant to embark on its historic journey to “kiss” the sun after being delayed multiple times this morning.

The car-sized object was expected to lift-off at 8:53am (3:53am EDT) from Cape Canaveral on the Florida coast.

However, a few minutes before the scheduled time the launch team was at a “no-go” status.

It was not confirmed what the delay was and the window to launch for today would be closing at 9:38am BST (4:38am EDT).

At 9:21am (4:21 EDT) the teams started their checks again and were able to start their final four-minute countdown after hearing “you have permission to launch”.

Final checks looked promising as the T-clock was set.

Teams then began the “recycling process” to shut their systems down as NASA confirmed the mission was scrubbed and rescheduled for Sunday morning.

The car-sized probe will utilise Venus to try and achieve an orbit around the sun by helping to slow it down. It will take six weeks for the object to get to Venus.

The mission, once it launches, will take seven years and it will take 55 times more energy to go the Sun than to Mars.

The mission is expected to provide unprecedented information about solar wind and fundamental research about the Sun.

Nicola Fox, the mission project scientist, said on the morning of the scheduled launched: “We can still see the impact of space weather here on Earth because the solar wind is continually buffeting our planet.”

We Just Got Our Closest View of Europa in 20 Years, And We Can’t Stop Staring : ScienceAlert
Secret Clues in Tutankhamun’s Tomb Reignite The Idea That Nefertiti Is Hidden Nearby : ScienceAlert
We May Finally Know Why Oceans in The Southern Hemisphere Are Getting So Warm : ScienceAlert
Unique Remains of What Could Be The World’s Largest Bird Found in Australia : ScienceAlert
Watch A Great White Become an Orca’s Lunch in World-First Footage : ScienceAlert