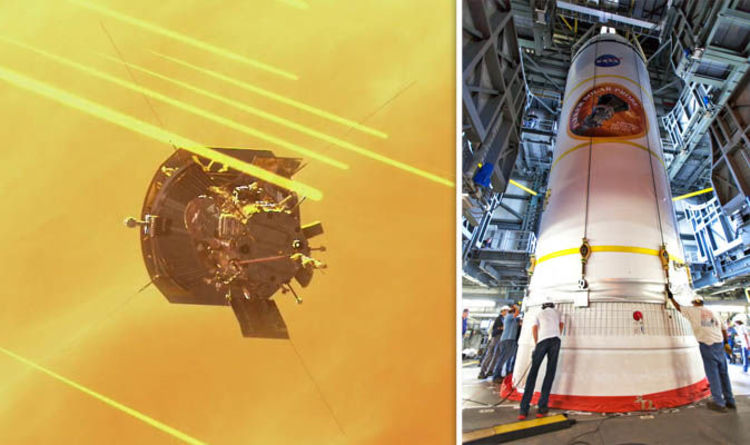 
The historic NASA launch will blast off the Parker Solar Probe on an unprecedented journey to the heart of the solar system.

The US space agency’s solar probe will travel to the outer reaches of the Sun’s atmosphere to study solar winds escaping from the star.

At its closest, the spacecraft will approach the Sun within 3.8 million miles (6.1 million km) of the star’s scorching surface.

Conditions like these would have spelt instant death to anything back on Earth, but the bleeding edge in heat shielding technology will keep the spacecraft’s internals at room temperature.

The 4.5-inch-thick (11.43 cm) carbon composite shield will protect the probe from the Sun and ensure its instruments conduct their experiments without hindrance.

NASA’s engineers proved the shield’s capabilities back on Earth during a fiery demonstration in front of an audience at the Johns Hopkins Applied Physics Lab.

Lead engineer Betsy Congdon blasted a fragment of the thermal protection system (TPS) with a blowtorch until it glowed a hot red.

After volunteer Curtis Wilkerson, a Parker Solar Probe engineer, was asked to touch the shield he did not recoil in pain.

Quite miraculously, the back surface of the TPS remained “nice and cool” to the touch despite glowing hot red on the other side.

The “sandwich” design of the TPS is remarkably lightweight and rigid despite the soft material used for its construction.

The central filling of the shield, the carbon foam, is typically used in the medical industry in bone replacement procedures.

Carbon on its own is a known heat conductor but the carbon-foam is about 97 percent air which reduces the amount of material for the Sun’s heat to travel through.

Once the shield is exposed to the full might of the Sun’s heat the backside of the TPS will only heat up to about 600 F (315 C).

As a result, the insides of the spacecraft will remain cool and operational throughout the duration of the probe’s seven-year-long mission.

The Parker Solar Probe will blast off from Florida’s Cape Canaveral Air Force Station at around 3.45am EDT (8.45am BST).

Weather permitting, NASA will not have to rely on any back up launch dates pencilled in from now until August 23, 2018.

After the space probe leaves Earth onboard a Delta IV-Heavy rocket, the spacecraft will slingshot around Venus to get closer to the Sun.

The rocket launch will be broadcast in its entirety live online, courtesy of NASA TV.

You can learn more on how to watch the NASA Parker Solar Probe launch live by clicking here.

There Are New FDA Safety Warnings About Breast Implants. Here’s What We Know : ScienceAlert
There’s Trouble Bubbling Up in Newly Formed Alaskan Lakes, And Scientists Are Worried : ScienceAlert
Fossil-Filled Australian Caves May Be 500,000 Years Older Than We Thought, Study Finds : ScienceAlert
Shimmering ‘Lakes’ Under The South Pole of Mars Might Be Something Else Entirely : ScienceAlert
Deep Brain Simulation Could Alleviate OCD When Other Treatments Have Failed : ScienceAlert