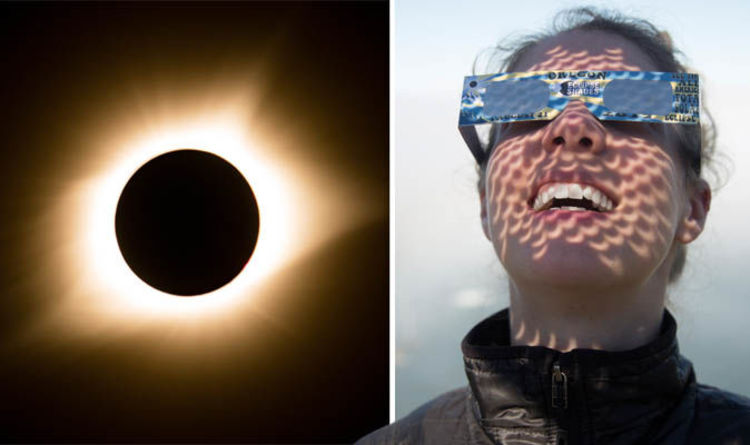 
Eclipse live streams draw in hundreds of thousands of spectators who, for one reason or another, cannot see the eclipse in person.

But what about the upcoming August partial eclipse? Are there any live streams to follow this weekend?

Unfortunately it appears as though there will be no telescopes and cameras pointed at the eclipsed Sun on Saturday morning.

The most likely explanation for this is simple: the partial eclipse is minimal and only located over remote parts of the world.

The eclipse will kick off on Saturday morning, around 8.02am UT (9.02am BST), over the icy North Atlantic and Greenland regions.

From there, the eclipsed Sun will be partially visible from Iceland and Scandinavia but only in the northern reaches of the country.

From the UK, stargazers would be lucky to spot minute signs of eclipsing when watching from the extreme north of Scotland.

The eclipse will thereafter move north and east, passing over swathes of Russia, including Moscow.

Countries lucky enough to fall under the eclipse’s path will see anywhere between five and 50 percent of eclipse coverage.

The unlucky viewing conditions are made all the worse when compared to the last major solar eclipse – the August 21, 2017, total solar eclipse over the US.

The so-called Great American Eclipse was watched by millions of Americans as it moved from cast to coast for the first time in 99 years.

At about the midway point of the eclipse, NASA reported more than 4.4 million people tuned in to its live stream to see the Sun turn dark for just a few minutes.

Millions more were seen out on the streets watching the skies with special filter glasses.

Ahead of the eclipse, astronomer Rick Fienberg of the American Astronomical Society, correctly predicted the eclipse would be the “most observed total eclipse in history”.

But there is another major astronomical event this weekend which will be broadcast around the world online.

The annual Perseid meteor shower peaks on the night of Sunday, August 12, and the morning of Monday, August 13.

You can watch the splendid meteor shower here on Express.co.uk courtesy of the Virtual Telescope Project in Italy.

“We will share our all-sky camera, to show any potential meteor it captured.”

During the meteor shower’s peak, as many as 50 to 60 shooting stars will streak across the sky every hour.

Termites Love Global Warming So Much That They May Make It Worse, Says Study : ScienceAlert
There’s Trouble Bubbling Up in Newly Formed Alaskan Lakes, And Scientists Are Worried : ScienceAlert
Wolves Really Can Become Attached to Humans Like Dogs Can, Adorable Study Finds : ScienceAlert
Early Puberty in Girls Surged in The Pandemic, And We May Finally Know Why : ScienceAlert
Experiment Reveals What 1 Hour in Nature Does to The Human Brain : ScienceAlert