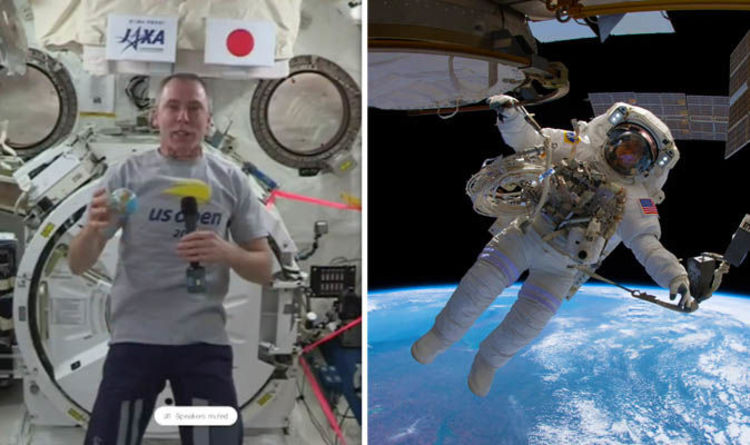 
The truly out-of-this world tennis match took place above Earth in the morning hours of Wednesday, August 22, aboard the orbital laboratory.

The match took place inside Node 1 of the ISS, which was cleared out of clutter specially for the game.

He said: “The challenge is that anytime we move quickly or have to plant our feet or do something forceful with our bodies, it’s truly tough because you can see if I let go of my feet I just start floating.

“So if I’m just in the middle of this module here and I try to swing a racket or hit a ball or do something like kick a soccer ball, I’ve got nothing to plant my feet on.

“So I just start floating randomly and then it’s difficult to put force into anything.”

The astronaut said the disadvantage of not having gravity in space makes the game a lot tricker than it might seem.

With no gravity, the tennis ball cannot bounce and react as it would do back on Earth when hit with a tennis racket.

The astronauts worked around this problem by adapting the game to allow them to serve the ball above their makeshift net as well as bellow it.

You can see the astronauts in the video video having a blast as they pirouette, do flips and glide around the space station module.

Commander Feustel said ahead of the match: “The fact that we don’t have gravity is hard. Balls won’t bounce, and gravity has no effect.

“To me it’s going to seem like that old game Pong, where you hit the ball and the ball just goes straight; it doesn’t bounce on anything.

“So it’s going to be challenging. We might have to invent some new rules.”

The ISS tennis game was organised by the United States Tennis Association just days before the US Open tennis championship in New York City on August 27.

A lucky few were given the chance to watch the tennis match live at the Billie Jean King National Tennis Center in Queens, New York – home to the US Open.

The game was projected onto the so-called Unisphere – a giant metal globe statue in Corona Park, just outside the tennis complex.

Fans were also given a chance to watch the game live online on YouTube, Facebook, Twitter and Periscope although there was no direct feed from the ISS – just a broadcast of the views from New York.

Earlier in 2017, before Commander Feustel blasted off to the ISS, he told a pre-mission briefing he was a big fan of tennis.

He teased: “Maybe we’ll get to play some tennis in space.”

These Are The Most Distant Star Clusters Ever Seen, And We Nearly Missed Them : ScienceAlert
Superconductivity Model With 100,000 Equations Now Contains Just 4 Thanks to AI : ScienceAlert
The Tonga Eruption’s 50 Million Tons of Water Vapor May Warm Earth For Months to Come : ScienceAlert
Amazing New Fossils Provide Earliest Known Traces of The Evolution of Our Jaws And Limbs : ScienceAlert
Termites Love Global Warming So Much That They May Make It Worse, Says Study : ScienceAlert