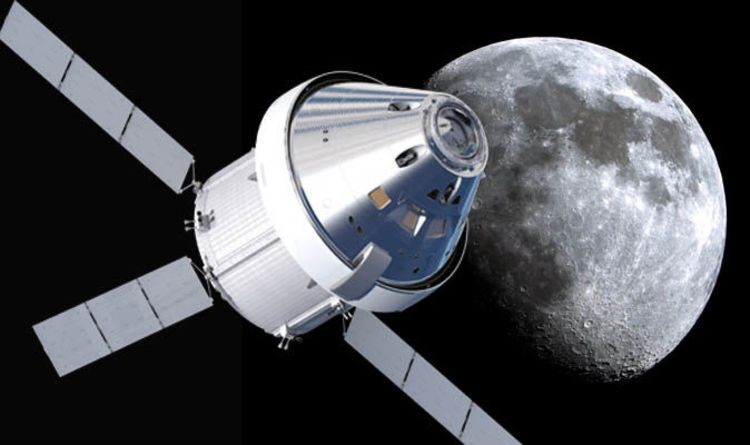 
The unmanned Orion probe will blast off into space atop NASA’s Space Launch System (SLS) for a three-week lunar voyage.

Orion will journey more than 40,000 miles (64,373 km) beyond the dark side of the Moon before the NASA craft returns home.

Upon return, the spacecraft will be subjected to the intense heat of atmospheric re-entry, nearing 2,760C (5,000 Fahrenheit).

The spacecraft protective systems will stop Orion from burning to a crisp before it splashes down in the Pacific Ocean.

“When the heat shield is installed, access to components becomes more difficult, and in some cases there is no more access.

“So by installing the heat shield you are declaring that a certain percentage of the spacecraft is finished.”

Orion is NASA’s pioneering spacecraft built for Exploration Mission-1 (EM-1) – a series of spaceflight missions designed to expand human reach to the Moon and beyond.

Mission manager Mike Sarafin said the mission is the first of many to come that will use the Deep Space Exploration system to prepare NASA and its astronauts for missions in deep space.

Orion’s first launch to the Moon and back will take place without a crew but later missions will take astronauts into space.

The spacecraft’s new heat shields, measuring 16.5 feet (five metres) in diameter are the single biggest heat shields ever mounted on a manned spacecraft.

The heat shields are built out of a titanium structure covered in a layer of carbon fibre material.

During re-entry, an outer later of ablative material dubbed Acvcoat will burn out to carry the away the heat of re-entry from the spacecraft.

Although a launch date is yet to be pencilled in, NASA has already charted out Orion’s first flight from start to finish.

Orion will stay in space longer than any spacecraft before, without docking to a space station.

Orion will pass about 100 miles (62 km) above the surface of the Moon and then used the lunar orb’s gravity to propel itself further out into space.

The spacecraft will drift though space for approximately six days before adjusting course for a trajectory that will take it back to Earth.

On its final flyby of the Moon, Orion will dip to about 60 miles (96 km) above the Moon.

Once the NASA spacecraft returns to Earth, Orion will barrel through the atmosphere at speeds up to 25,000 mph (11 km per second).

Mr Sarafin said: “This is a mission that truly will do what hasn’t been done and learn what isn’t known.

“It will blaze a trail that people will follow on the next Orion flight, pushing the edges of envelope to prepare for that mission.”

Biology Inspires a New Kind of Water-Based Circuit That Could Transform Computing : ScienceAlert
Unique Remains of What Could Be The World’s Largest Bird Found in Australia : ScienceAlert
Narwhals Are So Weird, Scientists Used Chaos Theory to Explain Their Behavior : ScienceAlert
Astronomers Think They Know The Reason For Uranus’s Kooky Off-Kilter Axis : ScienceAlert
Control of a 6-Qubit Processor in Silicon : ScienceAlert