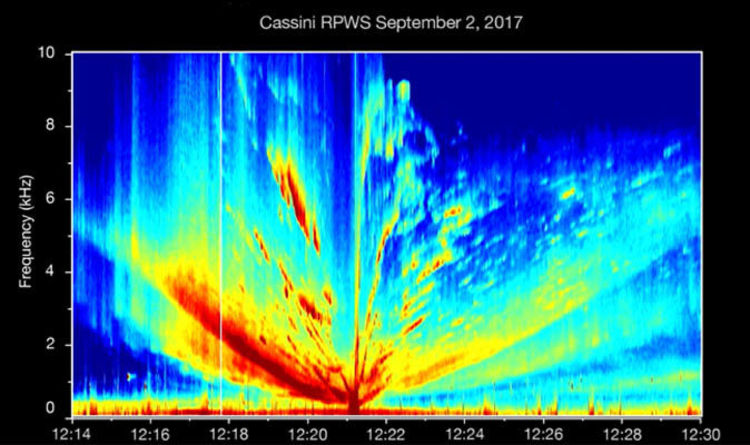 
The NASA recording was made during Cassini’s Grand Finale orbit – the spectacular conclusion of the 20-year-old space mission.

Thanks to the treasure trove of information collected by Cassini, NASA’s scientists were able to observe the interplay of plasma between the ringed planet and its moon.

NASA discovered waves of plasma travel along magnetic field lines between the two bodies much like an electrical circuit.

The USA space agency then converted the plasma recordings into an audible file, which created the very bizarre whooshing heard in the video above.

The NASA clip was compressed from 16 minutes down to just 28.5 seconds and the sound’s frequency was reduced by a factor of five.

Ali Sulaiman, planetary scientist at the University of Iowa, said: “Enceladus is this little generator going around Saturn, and we know it is a continuous source of energy.

“Now we find that Saturn responds by launching signals in the form of plasma waves, through the circuit of magnetic field lines connecting it to Enceladus hundreds of thousands of miles away.”

Unlike Earth’s moon, Enceladus is steeped in Saturn’s magnetic field and is incredibly geologically active.

The moon is a known source of water which vaporises and ionises in the environment around Saturn.

The Earth’s moon does not interact with our home planet in the same way.

Cassini recorded the plasma waves on September 2, 2017, just two weeks before the space probe was directed towards the surface of Saturn.

After two decades in the depths of the solar system, NASA pulled the plug on the Cassini mission, allowing to go out in a blaze of glory.

On September 15, 2017, Cassini made one final approach to Saturn to dive deep below its atmosphere to burn up like an asteroid.

For the duration of the free fall the space probe attempted to transmit data back to Earth for as long as it could keep its antennas pointed towards home.

The space probe’s greatest accomplishments were the discovery of global oceans and hydrothermal activity on Enceladus as well as the presence of liquid methane on the moon Titan.

The mission came to an end after 13 years of orbit around Saturn once it began to run out of rocket fuel.

The decision to direct Cassini towards Saturn, rather than leave it drifting in space, ensured future studies of potential life on Enceladus or Titan were not contaminated.

NASA said: “When Cassini ended, it left a rich scientific and engineering legacy.”

The Remains of This Recently Found Ancient Structure Are Even Older Than The Pyramids : ScienceAlert
Wolves Really Can Become Attached to Humans Like Dogs Can, Adorable Study Finds : ScienceAlert
We Have Our First Look at Neptune’s Rings in 33 Years, And They’re Glorious : ScienceAlert
Scientists Are About to Fire Up The Most Powerful Laser in The US : ScienceAlert
A Weird Blob of Hot Gas Is Whizzing Around Sagittarius A* With ‘Mind-Blowing Velocity’ : ScienceAlert