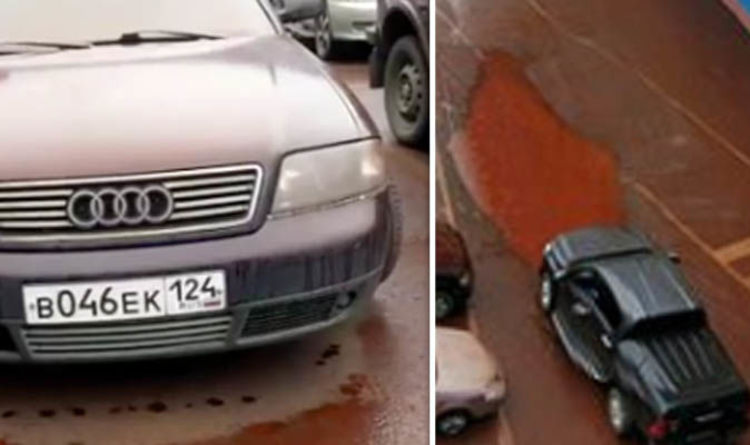 
The freak weather event last week stunned many of the 100,000 residents of Norilsk, Siberia in Russia.

A number of videos and photographs taken during the unusual phenomenon show blood-red water running down the streets and cars.

The blood rain drew widespread attention for its associations with the Biblical plagues of Egypt.

One witness likened the scenes to a “horror movie” of raining blood from a lacerated sky.

But officials in the region were quick to dismiss any concerns for health and a swift investigation by a local metal processing plant found the culprit behind the rain.

So what exactly was the cause of the bizarre, coloured rainfall?

Metal processing giant Norcnickel revealed the rain was caused by a clean up operation on the factory floor of the local Nadezhdinsky processing plant.

The blood rain was caused when vast amounts of red iron oxide residue, more commonly known as rust, was scraped off the factory’s floor.

The collected rusty residue was then blown away and carried by winds over the factory’s parking lot.

The mix of rust and rain created the “bloody rainfall” which fell on Norilsk.

The UK Met Office explained the phenomenon: ‘While it may sound like something you might see as the world ends, blood rain is actually a term used for a more harmless spectacle which sees red-coloured rain falling from the sky.

“It’s understood that blood rain occurs when relatively high concentration of red coloured dust or particles get mixed into rain, giving it a red appearance as it falls.

“Blood rain is not actually a meteorological or scientific term – instead it’s a colloquial phrase which can be found going a fair way back in history.”

According to NASA’s Earth Observatory, mentions of blood rain date back to the Roman statesman Cicero before the birth of Christ through to the Middle Ages and on.

NASA said: “When red rain drenched the Roman Senate in 191 BC, Roman historian Livy described the response: ‘Being disturbed by these prodigies the Fathers decreed that the consuls should sacrifice full-grown victims to whatever gods it seemed proper’.”

But the appearance of blood rain is a typically rare event either way and there have not been many recorded instances over the years.

In 2001, the South Indian province of Kerala periodically saw intense red rain during monsoon season, alongside reports of green and yellow rain as well.

Rare instances of blood rain in the UK are typically caused by Saharan dust missing with rain clouds over Britain.

Just before the orange snowfall, NASA’s satellites photographed a giant sandstorm moving with winds towards Greece and Russia from Egypt.

‘Dark Data’ Is Leaving a Huge Carbon Footprint, And We Have to Do Something About It : ScienceAlert
Long COVID Is Still Raising More Questions Than Answers, Say Researchers : ScienceAlert
These Are The Most Distant Star Clusters Ever Seen, And We Nearly Missed Them : ScienceAlert
Biology Inspires a New Kind of Water-Based Circuit That Could Transform Computing : ScienceAlert
Superconductivity Model With 100,000 Equations Now Contains Just 4 Thanks to AI : ScienceAlert