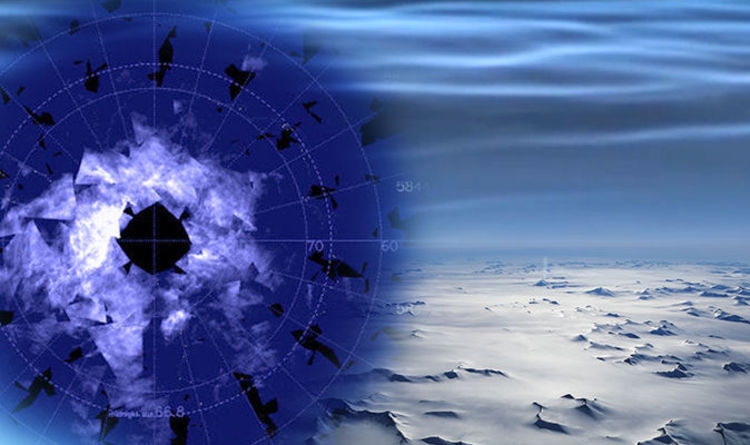 
NASA’s Aeronomy of Ice in the Mesosphere (AIM) satellite has been monitoring the mesosphere – the layer in the Earth’s atmosphere above the stratosphere – and noticed a stunning phenomenon occurring above the ice sheet.

The space agency recorded the stunning electric blue clouds swirling in the upper atmosphere, 83 kilometres above the surface.

This phenomenon occurs every year in the winter after summer water vapour rises into the atmosphere, allowing icy clouds to form on the edge of space.

As the sunlight passes through the clouds in the mesosphere, an electric blue glow is produced which can be seen using the AIM satellite.

The clouds are known as noctilucent clouds – or NLCs – and are seeded by disintegrating meteorites high in the Earth’s atmosphere.

Cora Randall, a member of the AIM science team at the University of Colorado’s Laboratory for Atmospheric and Space Physics, said: “The current season began on November 19.

“Compared to previous years of AIM data, this season seems to be fairly average, but of course one never knows what surprises lie ahead, particularly since the southern hemisphere seasons are so variable.”

A statement from the AIM pressroom explains that the clouds are being studied “in order to better understand the mesosphere, and its connections to other parts of the atmosphere, weather and climate.

“We observe them seasonally, during summer in both the Northern and Southern hemispheres. This is when the mesosphere is most humid, with water vapour wafting up from lower altitudes.

“Additionally, this is also when the mesosphere is the coldest place on Earth – dropping as low as minus 210 degrees Fahrenheit – due to seasonal air flow patterns.”

Some scientists believe that thanks to climate change, the clouds can be seen much farther north and south from the Earth’s poles.

NASA says: “In recent years NLCs have intensified and spread. When noctilucent clouds first appeared in the 19th century, you had to travel to polar regions to see them.

“Since the turn of the century, however, they have been sighted as close to the equator as Colorado and Utah.

“Some researchers believe this is a sign of climate change.

“One of the greenhouse gases that has become more abundant in Earth’s atmosphere since the 19th century is methane.”

Termites Love Global Warming So Much That They May Make It Worse, Says Study : ScienceAlert
Shimmering ‘Lakes’ Under The South Pole of Mars Might Be Something Else Entirely : ScienceAlert
Superconductivity Model With 100,000 Equations Now Contains Just 4 Thanks to AI : ScienceAlert
Amazing New Fossils Provide Earliest Known Traces of The Evolution of Our Jaws And Limbs : ScienceAlert
Behold, The Epic Last Images Taken by NASA’s Asteroid Redirection Test Spacecraft : ScienceAlert