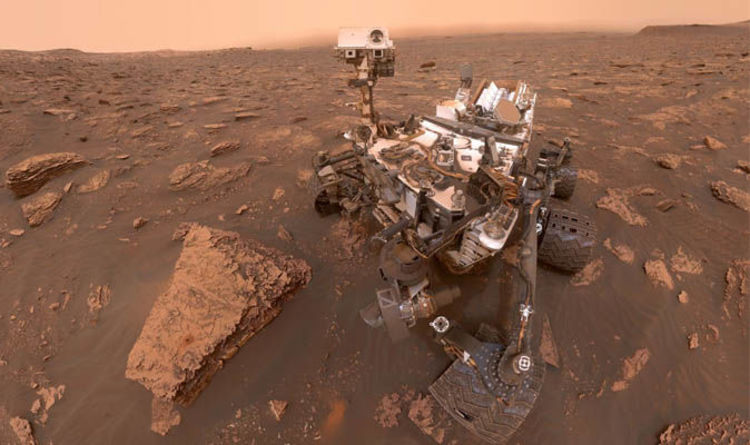 
A number of exciting Mars discoveries this year have reinvigorated public interest in the not-too-distant Red Planet.

NASA’s Opportunity rover found the first evidence of complex organic compounds beneath the surface of Mars in June – remains which were potentially left behind by ancient life.

Scott Hubbard, a former director of NASA’s Ames Research Center, said Mars has the potential to excite the public worldwide.

He said: “I’ve done lots of speaking at middle schools and if you talk about either dinosaurs or astronauts, the kids get excited.”

NASA has been planning to send manned missions to the dusty planet sometime in the 2030’s, preceded by a number of rover missions.

In a question and answer session with Futurity.org, Professor Hubbard said the plans have been recently dampened by the White House’s focus on returning to the Moon.

The space expert said: “NASA had been planning to send humans to Mars in the 2030s and I chaired an independent study that showed how it could be done on a budget that is plausible by using a minimum architecture—not trying to do everything.

“However, this new administration has announced a pivot to the moon.

“There are a lot of questions in the space community about what that means because if you went full-bore on a return to the moon the way it has been suggested in the past—building a base and infrastructure and rockets—that would delay, in my view, humans to Mars by another generation.”

One major issue that could throw a spanner in the works is the lack of proper funding from the current administration.

Professor Hubbard revealed President Lyndon B Johnson’s government was able to secure NASA up to four percent of the federal budget.

But since 1975, the NASA budget has had to make do with only about half a percent of the available federal funds.

“There’s going to have to be international partners and entrepreneurs because the one that has worked is the one that spent an enormous amount of money.”

What does NASA expect to find on Mars?

One of the biggest questions concerning human exploration of the Red Planet is whether or not astronauts will one day find evidence of past alien life.

Since 2012, potential evidence of water on Mars has been trickling through to the scientific community.

Water is one of the most curial building blocks of life and in July this year, researchers studying data obtained by the European Space Agency announced the potential presence of an underground lake on Mars.

According to Professor Hubbard, looking for liquid water is top priority in the hunt for alien life.

He said: “When I was NASA’s Mars program director, the slogan was ‘follow the water’ because liquid water is necessary for all life as we know it.

“Water shapes planets, it determines the climate—past and present—and, of course, if people are planning to live there, you need water.”

The news comes after ex-NASA chief scientist Ellen Stofan told a US Senate subcommittee she is confident astronauts will one day dig out fossils of ancient Martian microbes.

She said: “The problem is life remained in the oceans for a billion years and it took well over a billion years for life to gain any complexity. That’s why I’m optimistic life did evolve on Mars.”

But the space expert is convinced none of NASA’s cutting-edge rover have the technical ability to properly search through Martian soil for thesis microbial fossils.

She argued it will take many astronauts “breaking rocks” to sift through the planet’s soil before some rock solid evidence of alien life is found on Mars.

A New FRB Signal Has Buzzed Nearly 2,000 Times in Just Two Months, Raising a Mystery : ScienceAlert
The Orbit of a Sun-Like Star Reveals The Nearest Black Hole Ever Found : ScienceAlert
Does IQ Decline as We Age? One Type of Intelligence Peaks in Your Twenties : ScienceAlert
The Frogs Vanished, Then People Got Sick. This Was No Harmless Coincidence. : ScienceAlert
One of The World’s Largest Organisms Is Disintegrating. Here’s How We Might Save It. : ScienceAlert