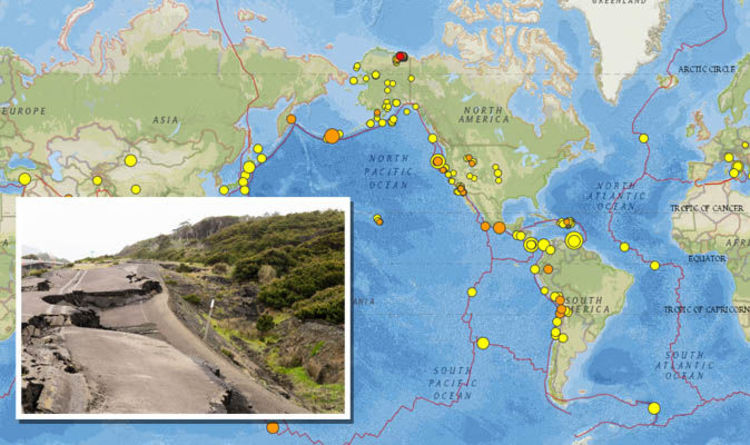 The United States Geological Survey (USGS) and EarthquakeTrack follow the number of earthquakes rocking the planet around the clock.

In the past 24 hours, a total of 149 earthquakes stronger than magnitude 1.5 hit the planet, most of which were in the so-called Ring of Fire.

EarthquakeTrack has tracked 1,210 earthquakes in the last seven days and more than 82,800 in the past year.

Today, a powerful magnitude 6.3 tremor hit the Andreanof Islands on the border of the North Pacific Ocean and Bering Sea.

The incredibly high number of earthquakes gave rise to fears a bigger and more catastrophic cataclysm dubbed the Big One is brewing in the Ring of Fire.

Twitter user Cauline, @koreeu_93, tweeted from the Philippines: “Student here complaining about the earthquake drills in their school this morning.

“I just hope when the ‘Big One’ comes here in the Philippines, they can save their a****.

“Meanwhile, there have been 69 massive earthquakes in the Pacific Ring of Fire for the past 48 hours.”

Big One BOMBSHELL: More than 11,000 earthquakes struck in the past 30 days (Image: EARTHQUAKETRACK/GETTY)

And David A Loving, @DavidloongA, tweeted: “If you need a distraction from Trump, get ready California. The Big One is coming.”

But what exactly are the odds of the Big One earthquake splitting the Ring of Fire Open?

The Ring of Fire is a chain of earthquake and volcanic activity hotbeds running along the outer rim of the Pacific Ocean.

Also known as the Circum-Pacific Belt by geologists, about 90 percent of the world’s earthquakes happen in this part of the globe.

The Ring of Fire is the prime location for the Big One going off due to the tectonic plate boundaries interacting with one another below the ocean.

The San Andreas fault line in California is one of the main areas were the intense tectonic activity produces a lot of tremors.

If the Big One were to strike along the Ring of Fire it could be anywhere between magnitude 8 and magnitude 9 on the Richter scale.

The potential destructive force of the Big One could wipe out cities and trigger tsunamis along the US East Coast. 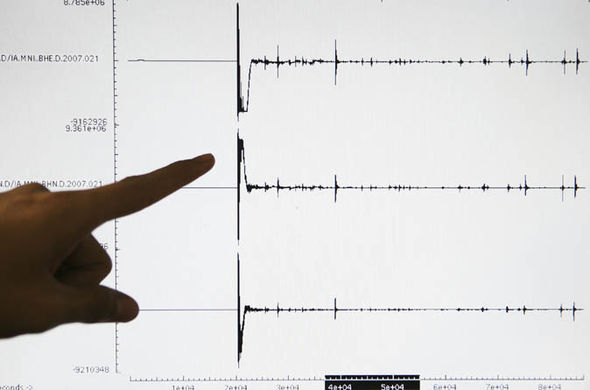 Ring of Fire: Some people fear the Big One could strike without warning (Image: GETTY)

But geologists assure there is nothing to fear because the Big One could strike anytime next week or anytime in the next 200 years.


Get ready California. The Big One is coming

Geologist Erik Klemetti said: “The Big One will be generated by the stress built up as the Juan de Fuca plate off the coast of Oregon, Washington, California and British Columbia slides underneath North America.

“The plates can stick, creating stress that is sometimes released as giant earthquakes – and many smaller ones.

But this is unlikely to happen anytime soon and Mr Klemetti said the likelihood of the Big One tearing through the Ring of Fire in the next 50 years is about 4.5 percent.

Dr Ken Hudnut, a California Institute of Technology geophysicist, noted the recent earthquakes are not correlated in any shape or form.

The tremor expert argued people have a tendency to seek out patterns where they do not exist in the same way star consultations are not real.

Dr Hudnutt dismissed all fears of the Big One coming. 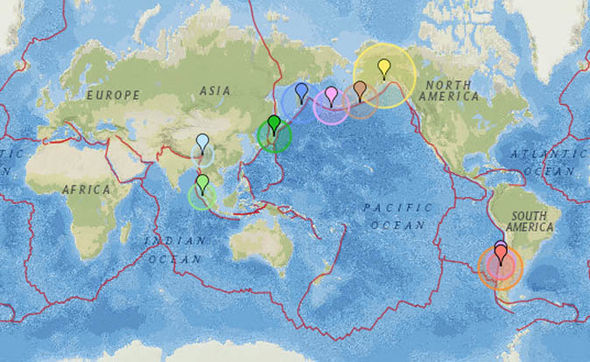 Big One: Geologists assure the Ring of Fire is safe from the Big One earthquake (Image: EARTHQUAKETRACK)

Seismologist Dr Lucy Jones came to the similar conclusion this week, assuring a major earthquake event was not brewing on the horizon.

She said: “For the last couple of months, people have been worried that the world wasn’t having enough quakes.

“Now people are worried we are having too many.

“Human beings continue to try to make patterns in random distributions and ascribe meaning to those illusory patterns.”

The Tonga Eruption’s 50 Million Tons of Water Vapor May Warm Earth For Months to Come : ScienceAlert
These Are The Most Distant Star Clusters Ever Seen, And We Nearly Missed Them : ScienceAlert
Fossil-Filled Australian Caves May Be 500,000 Years Older Than We Thought, Study Finds : ScienceAlert
Deep Brain Simulation Could Alleviate OCD When Other Treatments Have Failed : ScienceAlert
Termites Love Global Warming So Much That They May Make It Worse, Says Study : ScienceAlert