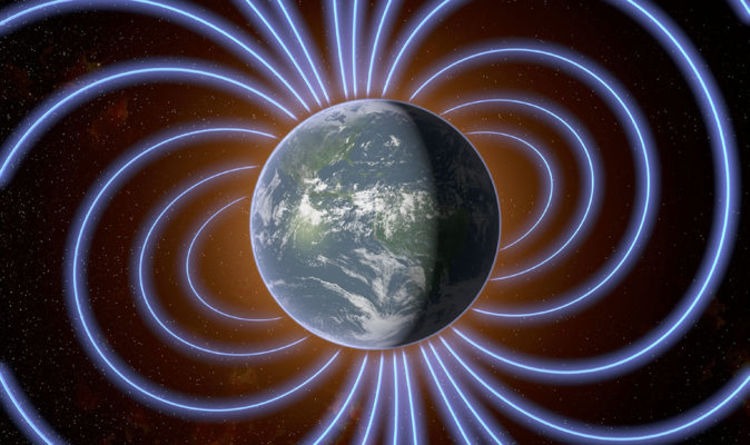 
In recent years, scientists have been gearing up for a potential flip in the magnetic field – a natural phenomena which occurs every 200,000 to 300,000 years when the north and south poles switch.

The poles attempted to swap 40,000 years ago but the process failed. As a result, the last time the poles switched place was 780,000 years ago, meaning we are long overdue a pole reversal.

A new study has found that a flip in the poles could take just decades – something which was previously thought to take centuries.

Professor Andrew Roberts from the ANU’s Research School of Earth Sciences said: “The record provides important insights into ancient magnetic field behaviour, which has turned out to vary much more rapidly than previously thought.”

When the switch does happen, it will reduce the magnetic field’s strength by up to 90 percent during these decades.

Many species of animals, most notably birds, have a sense for the magnetic poles which allow them to successfully navigate the globe during periods of mass-migration, leading experts to fear that it could cause confusion. However, as humans were not about during the last switch, it is impossible to accurately predict what could happen.

But with a weakened magnetic shield, the Earth would become more vulnerable to solar storms.

Solar storms are sparked by radiation which pummels our planet heats up the outer atmosphere, causing it to expand.

This means satellite signals would struggle to penetrate the atmosphere, leading to a lack of internet service, GPS navigation, satellite TV such as Sky and mobile phone signal.

Additionally, increased currents in the Earth’s magnetic field – or magnetosphere – could theoretically lead to a surge of electricity in power lines, which can blow out electrical transformers and power stations leading to a temporary loss of electricity in a region – all of which could cost billions of pounds in outages to infrastructure.

Prof Roberts adds: “Earth’s magnetic field, which has existed for at least 3.45 billion years, provides a shield from the direct impact of solar radiation.

“Even with Earth’s strong magnetic field today, we’re still susceptible to solar storms that can damage our electricity-based society.”

However, Prof Roberts is hoping for time and that a pole switch is not imminent.

He said of the study published in the journal Proceedings of the National Academy of Sciences of the United States of America (PNAS): “Hopefully such an event is a long way in the future and we can develop future technologies to avoid huge damage, where possible, from such events.”

New Approach to Machine Learning Could Make Chaos More Predictable : ScienceAlert
3 Major Aquatic Animal Groups Can Trace Their Lineage to This Ancient Armored ‘Worm’ : ScienceAlert
Biology Inspires a New Kind of Water-Based Circuit That Could Transform Computing : ScienceAlert
The Pacific Is Destined to Vanish as Earth’s Continents Meld Into a New Supercontinent : ScienceAlert
Control of a 6-Qubit Processor in Silicon : ScienceAlert