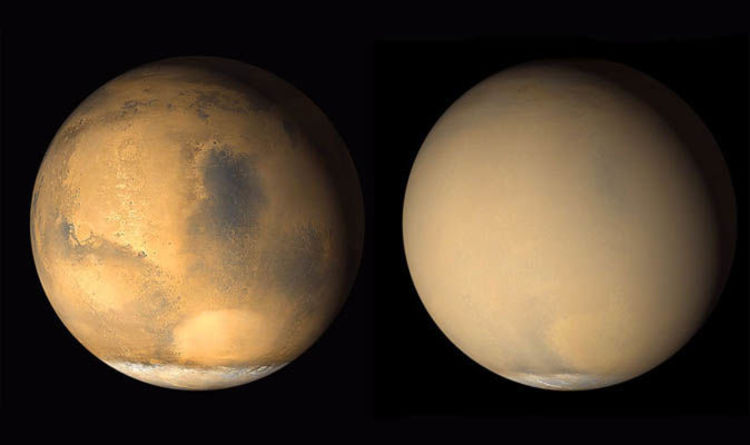 
The gigantic Martian storm kicked up in late May and has so far spread to every corner of the planet.

The hazardous conditions have already forced NASA’s Opportunity rover to hunker down to conserve power as the Curiosity rover has been left stumbling through the darkness.

Astrophotographer Damian Peach created a striking animation of the dust storm spreading to demonstrate the scale of chaos.

The astronomer snapped separate photos of the storm towards the end of June, capturing the change in time.

“This animation created from my June 28 image and reference Mars Global Surveyor map of the exact same longitude really shows what happened in recent weeks.

“Thanks to Tom Ruen for the map link.”

The astronomer told Space.com it might take months before the storm clears up, assuming further storms do not develop.

The Martian storm first appeared on NASA’s radars in May as a localised event but quickly grew to epic proportions.

On Monday, July 9, an update posted by the Curiosity rover’s mission team shows some signs of conditions clearing but not enough to see anything beyond the horizon.

Dr Wiens wrote: “The image above shows the Mastcam view as of Sol 2104, in which the nearby terrain is clearly visible, but nothing beyond the foreground, and the entire scene looks a murky red-brown color due to the dust storm.

“Unhampered by the storm, Curiosity is heading back toward a site visited on Sol 2005 for what we hope will be the next drill target.”

The storm is being observed by NASA’s MRO, Odyssey and Maven orbiters.

Scott Guzewich, a member of the Curiosity rover team, posted a mission update to a NASA blog on Friday noting a slow decline over the last two weeks.

He said: “It’s possible the dust storm has reached its ‘peak’.

“We may now be entering (or soon entering) the period where the massive amount of dust in the atmosphere will slowly settle out and Mars’ shrouded surface may once again be clearly visible from space.”

Martian storms like this typically occur every six to eight Earth years on average.

The dust storms tend to grow to a continental-size between spring and summer when the planet is closer to the sun.

NASA’s Dr Rich Zurek, a space scientist for the Mars Program Office, said: “Out of these seasonal storms that occur only about a dozen or so have ever, in the historical record of the modern planet, expanded to circle the planet or cover the globe.

“Thanks to the ongoing Mars Exploration Program, Mars is being monitored by a series of spacecraft orbiting the planet on essentially a daily basis for nearly 20 years.”

A Famous Golden Palace in Spain Is Turning Purple, And Now We Know Why : ScienceAlert
We Just Got Our Closest View of Europa in 20 Years, And We Can’t Stop Staring : ScienceAlert
Astronomers Think They Know The Reason For Uranus’s Kooky Off-Kilter Axis : ScienceAlert
Watch A Great White Become an Orca’s Lunch in World-First Footage : ScienceAlert
It Turns Out There Is Such a Thing as Good Gossip, According to New Research : ScienceAlert