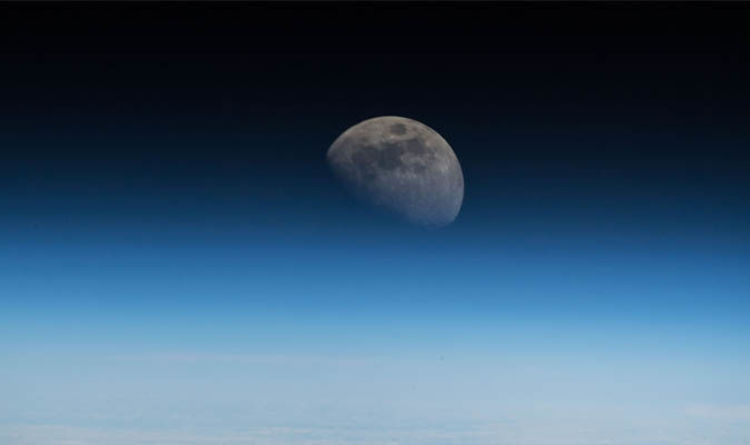 
The lunar photograph was snapped by European Space Agency (ESA) astronaut Alexander Gerst who is currently onboard the International Space Station (ISS).

Dr Gerst took the photograph on one of the space laboratory’s flybys of the planet, which happen 15 to 16 times a day.

Sharing the photo on Twitter, the astronaut said: “By orbiting the Earth almost 16 times a day, the ISS crew travel the distance to the moon and back – every day.”

The astronomer previously filmed the Northern Lights Aurora Borealis from the ISS.

NASA said along with the photo: “The International Space Station is the world’s only orbital laboratory.

“An international partnership of space agencies provides and operates the elements of the station.

“The principals are the space agencies of the United States, Russia, Europe, Japan and Canada.”

On July 6, the July moon was in the so-called Last Quarter phase and only about 48 percent of the moon was illuminated.

On Tuesday, July 10, the moon is all but shrouded in darkness – the so-called Waning Crescent – with only 10 percent of its face lit up.

Over the next two days the moon will turn to complete darkness and will disappear on July 13 as the New Moon.

But the real spectacle is still to come on the night of Friday, July 27, with the total lunar eclipse Blood Moon.

On the night of the eclipse, the moon’s orbital path will see it travel through the centre of the Earth’s darkest shadow, or Umbra.

According to NASA, an eclipse is “a phenomenon that occurs when the Earth, moon and sun are in perfect alignment, blanketing the moon in the Earth’s shadow.”

Over the course of one hour and 43 minutes, the moon will dramatically darken and take on a red to orange hue.

The effect known as Raleigh scattering paints the moon with refracted bands of red sunlight bent around the planet’s atmosphere.

The same process is responsible for the blue colour of the sky and why the sky appears red during a sunset.

This year the total lunar eclipse will be visible from Central Asia to Eastern Africa and Europe, Southern America, West Africa and Australia.

Skywatchers in the UK will be able to see the Blood Moon peak over the horizon eclipsed from around 8.30pm, but times will vary slightly between cities.

The Blood Moon is the first total lunar eclipse visible from the UK since September 2015.

The next total lunar eclipse will appear on January 21, 2019, and will be visible from the Central Pacific, Americas, Europe and Africa.

These Are The Most Distant Star Clusters Ever Seen, And We Nearly Missed Them : ScienceAlert
Weight Lifting in Old Age Does More Than Just Keep Your Muscles Strong : ScienceAlert
Behold, The Epic Last Images Taken by NASA’s Asteroid Redirection Test Spacecraft : ScienceAlert
‘Unbelievable’ Video Shows 2 Bees Working Together to Open a Soda Bottle : ScienceAlert
Narwhals Are So Weird, Scientists Used Chaos Theory to Explain Their Behavior : ScienceAlert