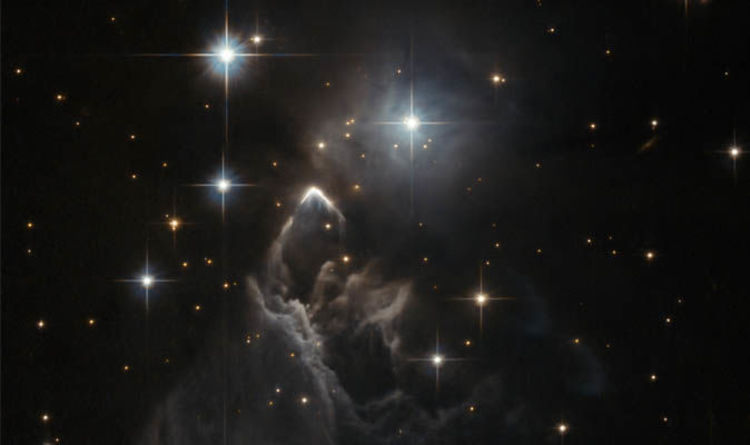 
The giant cloud of dust and gas dubbed nebula IRAS 05437+2502 sits in the constellation Taurus.

From a distance, the nebula is nothing more than a faint-looking object near the centre of the Milky Way.

Very little is known about the gas cloud and so far, NASA’s scientists have been unable to study the nebula cloud in great detail.

But the nebula’s unusual “boomerang-shaped” features have sparked interest from astronomers who can now have a good look at it.

The faint nebula was first discovered by the Infrared Astronomical Satellite (IRAS) in 1983.

The IRAS tool was the very first telescope of its kind to scan the vast expanse of space in infrared wavelengths.

NASA has now hailed Hubble’s image of the “enigmatic” cloud of space dust as a “lucky observation”.

The US space agency said: “The little-known nebula IRAS 05437+2502 billows out among the bright stars and dark dust clouds that surround it in this striking image from the Hubble Space Telescope.

“It is located in the constellation of Taurus, the Bull, close to the central plane of our Milky Way galaxy.

“Unlike many of Hubble’s targets, this object has not been studied in detail and its exact nature is unclear.”

According to NASA, the nebula may initially appear to be a relatively small region of star formation.

The space agency said the “eye-catching” formations of gas in the Hubble picture could have been caused by the effects of fierce ultraviolet radiation from young and bright stars.

But the nebula’s “boomerang” features could reveal a much more interesting history of stars being “ejected” from the clouds of gas at incredible speeds.

NASA said: “The interaction of a high-velocity young star with the clouds of gas and dust may have created this unusually sharp-edged, bright arc.

“Such a reckless star would have been ejected from the distant young cluster where it was born and would travel at 200,000 kmh, 124,000 mph, or more through the nebula.”

Hubble’s picture was snapped with the Wide Field Channel of the Advanced Camera for Surveys.

But the photo was not part of a longer observation, rather part of a so-called snapshot survey.

These brief observations of deep space are slotted into Hubble’s scheduled whenever NASA’s astronomers see a window of opportunity.

NASA said there is no guarantee these quick observations will take place “so it was fortunate that the observation was made at all”.

The space agency said the Hubble picture was created from images taken through yellow and near-infrared filters.