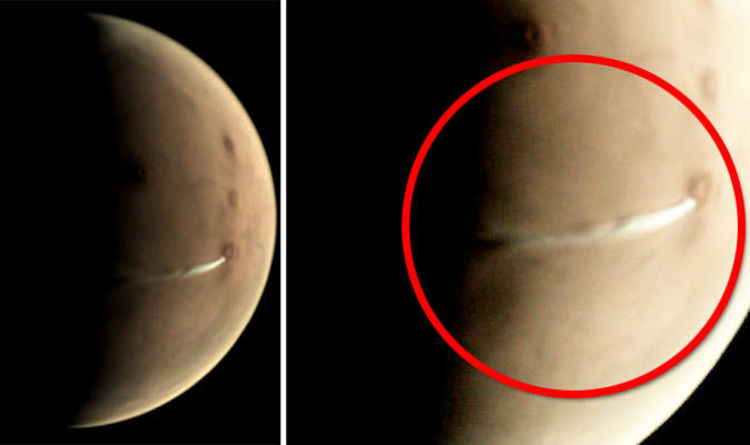 
UFO hunters claimed Mars photos taken by NASA were altered to conceal evidence of a “massive eruption” or explosion.

The shocking claim was made after conspiracy theorists compared two sets of images snapped by the US space agency and the European Space Agency (ESA).

The ESA’s photos appear to show a smoke-like streak running across the Red Planet near a long-extinct Martian volcano.

NASA photos taken on the same day however do not show the same atmospheric feature, leading to online accusations of foul play.

Conspiracy theorists behind the popular YouTube channel Secureteam10 claimed the “smoke plume” is evidence of a potential “cover-up happening here”.

In a video titled Something MAJOR Happened On Mars… Are They Hiding It?, conspiracist Tyler Glockner suggested the smoke could have also come from a detonation.

He said: “What is strange here is that there are two sets of images.

“One by the European Space Agency, which clearly show what appears to be a plume coming out of this volcano.

“Then we have another set of images captured by NASA and one of their probes, taken on the same day, same time and yet we see nothing.

“It makes you wonder if NASA is already getting ahead of this and editing this plume out or is something weird happening here? We just don’t know yet.”

Many of the video’s viewers were sold on the alien smoke plume theory while others suggested NASA is terraforming the planet for human arrival.

Terry Powell commented: “Perhaps Mars is being terraformed to enable rich and so-called elite to move to Mars when disaster strikes the Earth.”

Ryan O’Malley said: “Maybe the secret government is terraforming the planet by sending nukes to melt the ice so it can support the breakaway civilisation.”

And Rob Bowen said: “Governments should stop hiding things from the people that pay for their things.

“We are the investors and they should not be hiding things.”

However, according to the ESA, the “smoke plume” does not in any way prove to alien or volcanic activity but is instead a giant cloud of evaporated ice water.

The “elongated cloud formation” was snapped hovering near the 12-mile-high (20km) Arsia Mons volcano near the planet’s equator.

The space agency said: “In spite of its location, this atmospheric feature is not linked to volcanic activity but is rather a water ice cloud driven by the influence of the volcano’s leeward slope on the air flow – something that scientists call an orographic or lee cloud – and a regular phenomenon in this region.”

The Martian cloud was snapped on October 10 by the Mars Express mission with the Visual Monitoring Camera (VMC).

Do You Need to Drink Eight Glasses of Water a Day? It’s Complicated : ScienceAlert
Crocodiles Seem to Be Thriving in a Toxic River That’s More Like a Sewer. Here’s Why : ScienceAlert
Engineers Propose an Ambitious Plan to Bury Excess Carbon at The Bottom of The Ocean : ScienceAlert
Cannabis For Pain Relief? Review of 20 Studies Provides Sobering Results : ScienceAlert
Astronomers See a Star’s Final Scream Into a Black Hole Halfway Across The Universe : ScienceAlert