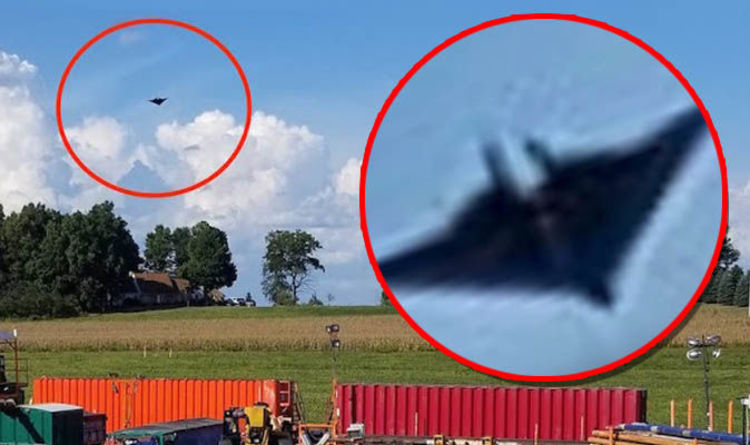 
The unidentified flying object (UFO) snapped on September 3 this year has sparked a frenzy online after emerging on the Mutual UFO Network (MUFON).

UFO-hunters are convinced the black triangular object is a “huge” alien spaceship unlike anything seen before.

According to notorious UFO conspiracist Scott Waring, the black triangle is neither man-made or natural.

Mr Waring said in a video shared to YouTube the UFO is “really, really cool looking” and has a number of unusual features.

He said: “The UFO seems to almost have one, two, three tail-like appendages hanging from it behind it.

“It has three pointy ends – it’s not just two – this doesn’t look like a stealth bomber or a stealth fighter here.

“This is really, really strange and there is a huge divide in between.

“This UFO, whatever it is, is nothing like I’ve ever seen before.”

Based on his calculations, Mr Waring claimed the UFO could be bigger than a Boeing 747 jet airliner – an aircraft with a wingspan of nearly 200ft (60m).

The supposed alien spacecraft was photographed on September 3, 2018, when it passed over a construction site in the US village of Perrysville, Ohio.

Some of Mr Waring’s supporters were stunned by the UFO photographs, claiming it is definitely the real deal.

Mr Waring also noticed the black triangle appears to cast a shadow onto the clouds below, seemingly confirming his extraterrestrial theory.

He said: “The UFO is also throwing a shadow onto the cloud below, which is 100 percent amazing, because this means the UFO was freaking huge.

“This UFO must have been cloaked because something this big would normally stand out like a sore thumb.

“So I say the digital eye caught this because it is more precise of an instrument than our flawed eye which misses out on a lot of the spectrum.”

The person who originally took the UFO photo, noted the black triangle made no jet engine sound or other noise when it passed overhead.

However, this is not the first ‘black triangle UFO’ to be spotted over the US and is one of many annual sightings.

A declassified UK Ministry of Defence report on so-called Unidentified Aerial Phenomena (UAP) concluded most sightings can be explained by natural causes or misrepresentation.

The secret document revealed to the public in 2006 reads: “Considerable evidence exists to support the thesis that the events are almost certainly attributable to physical, electrical and magnetic phenomena in the atmosphere, mesosphere and ionosphere.

“They appear to originate due to more than one set of weather and electrically-charged conditions and are observed so infrequently as to make to unique to the majority observers.

“There seems to be a strong possibility that at least some of the events may be triggered by meteor-reentry, the meteors neither burning up completely nor impacting as meteorites but forming buoyant plasmas.”

Ancient ‘Weird Wonders’ Could Be Leftovers From The Cambrian Explosion : ScienceAlert
Two Black Holes Met by Chance, And It Created Something Never Seen Before : ScienceAlert
Volcanoes May Have Transformed Venus Into a Blistering Hellscape : ScienceAlert
The FDA Just Approved The Most Expensive Drug in The World : ScienceAlert
10 Days After Its Launch, Orion Has Successfully Entered Lunar Orbit : ScienceAlert