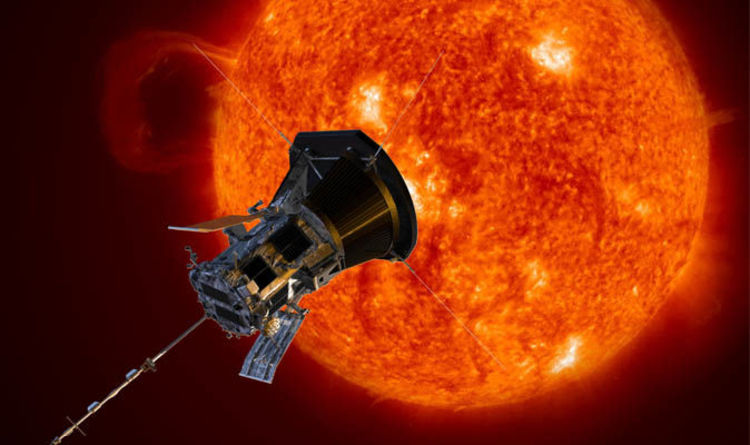 
NASA’s solar probe has officially broken 1972 the record set by the Helios 2 spacecraft, to become the closest space probe to approach the Sun.

The technology broke the previous record of 26.55 million miles from the Sun on Tuesday, October 29.

US space agency NASA boasted in a statement the Parker Solar Probe will continue to break even more records as it makes numerous approaches to the star.

NASA launched the exploration probe to the Sun less than 80 days ago, on August 12, on a first of its kind mission to study the Sun’s corona.

During its mission, the probe will dip in and out of orbit around the Sun reaching within 3.83 million miles of its scorching surface.

Andy Driesman, Parker project manager, said: “It’s been just 78 days since Parker Solar Probe launched, and we’ve now come closer to our star than any other spacecraft in history.

“It’s a proud moment for the team, though we remain focused on our first solar encounter, which begins on October 31.”

Not content with just being the closest ever probe to the Sun, NASA expected the spacecraft to break a speed record on Tuesday night as well.

On October 31, the day of Halloween, NASA will begin its first so-called solar encounter with the burning star.

After that, the space probe will gradually creep closer to the Sun’s surface until it reaches its closest possible distance on November 5.

NASA said: “The spacecraft will face brutal heat and radiation conditions while providing humanity with unprecedentedly close-up observations of a star and helping us understand phenomena that have puzzled scientists for decades.

“These observations will add key knowledge to NASA’s efforts to understand the Sun, where changing conditions can propagate out into the solar system, affecting Earth and other worlds.”

The NASA Parker Solar Probe blasted off from Cape Canaveral Air Force Station in Florida, US, this summer.

NASA and the Applied Physics Laboratory at John Hopkins University in Laurel, Maryland are operating the mission.

At the same time, the probe has to withstand immense temperatures of up to 1,377 Celsius (2,500 Fahrenheit).

You can learn more about how the probe is protected from the Sun’s radiation here: Can NASA’s space probe survive Sun’s melting heat?

The probe is comparable in size to a small car and NASA expects it to reach speeds of 430,000 mph.

The Sun-bound mission is expected to last around seven years, during which the probe will orbit the planet Venus to get closer to the Sun.

Mars Once Had So Much Water, It Could Have Been An Ocean World, Scientists Say : ScienceAlert
Alzheimer’s Gene Doesn’t Guarantee Dementia. Here’s What You Can Do to Reduce Risk : ScienceAlert
Forests at Risk of Burning an Extra 30 Days a Year Without Climate Action : ScienceAlert
Chilling Glimpse Into Our Future if We Survive Another Million Years : ScienceAlert
People in Portland Planted Trees. Decades Later, a Stunning Pattern Emerged : ScienceAlert