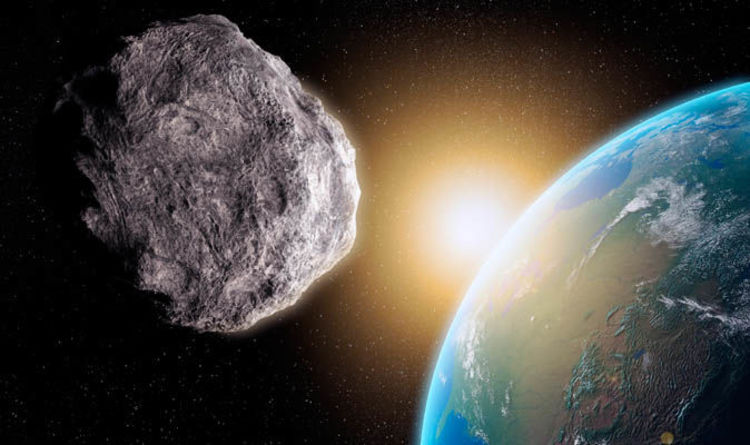 The asteroid will reach its closest possible distance to the planet at approximately 5.33pm GMT (UTC).

The US space agency’s California-based Jet Propulsion Laboratory (JPL) calculated this time to an uncertainty of one minute in either direction.

At 121.4 ft, the asteroid is just over three times the length of a new London double-decker bus.

Even at the lower end of the estimate, the space rock approaches the size threshold of destructive asteroids.

Any space rock measuring upwards of 65.6 ft (20m) in diameter could be dangerous if undetected, just like the Chelyabinsk meteor which injured 1,000 people after erupting over Russia in 2013.

But is there any risk of the space rock approaching the planet close enough tomorrow to strike the Earth?

At its closest, the asteroid will only come within 0.01381 astronomical units (au) or 5.37 Lunar Distances (LD) of our home world.

One astronomical unit describes the average distance from the Earth to the Sun, or about 93 million miles (149.6 million km).

On the cosmic scale of distances, this is an incredibly close brush with the barrelling space rock and is classified an Earth Close Approach.

Close Approaches are made by so-called Near Earth Objects (NEOs) – asteroids and comets which come within 0.05au of Earth, or 4.64 million miles (7.47 million km).

NASA explained: “As they orbit the Sun, Near-Earth Objects can occasionally approach close to Earth.

Asteroid 2018 UC is an Aten-type asteroid, meaning it has an orbital path summer to that of Asteroid 2026 Aten.

On Tuesday afternoon, the asteroid will zip by at breakneck speeds of more than 40,510mph (18.11 km per second).

Based on its orbital trajectory NASA believes the asteroid last made a close approach to Earth on October 29, 2017.

The asteroid will next swing by on October 28, 2019, after it visits Venus on February 4 next year.