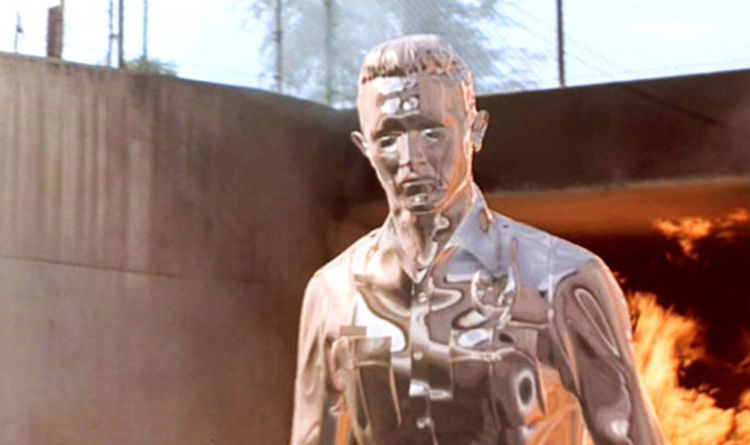 
In the second instalment of the Terminator franchise, titled ‘Terminator 2: Judgment Day’, a robot called T-1000 can alter its shape and heal itself.

Now scientists have drawn inspiration from the sinister character – although their intentions are a lot less evil.

The miniature Chinese robot consists of a small plastic wheel, a lithium battery, and drops of gallium, a soft silvery metal.

The little machine is palm-sized, but the experts hope that it can be used in the future to search areas which are inaccessible for humans – such as looking for survivors in earthquake rubble.

Tang Shiyang, a research fellow with the University of Wollongong, Australia, told South China Morning Post: “In the future, we expect to further develop soft robots incorporating liquid metal that could be used in special missions such as searching for and rescuing earthquake victims, since they can change shape to slide under doors or make it through spaces humans can’t get into.

“We think liquid metal alloys could help with the development of self-reconfiguring robots that can change their own shape.

“Also, I have been thinking about flexible robots like T-1000 since I watched that film when I was 10.”

In the team’s prototype, the liquid metal drops were sealed in a tube, with electricity dictating which form the metal took.

This altered the wheel’s centre of gravity, causing the wheel to turn and allowing the machine to move, according to the work published in the journal Advanced Materials.

The team hope that in the future, the tiny robot can be used for such uses as military espionage, or once they can make the machine extremely small, to fight disease in the human body.

Li Xiangpeng, a robotics professor at Soochow University in Suzhou, China, said: “Tiny nano-robots could deliver cancer drugs and hunt down tumour cells inside the human body, given its flexibility and high energy conversion rate.”

Cannabis For Pain Relief? Review of 20 Studies Provides Sobering Results : ScienceAlert
The Science Behind Why You Sprain Your Ankle So Often, And What You Can Do About It : ScienceAlert
A Tobacco Plant Has Been Engineered to Produce Cocaine in Its Leaves : ScienceAlert
Two Black Holes Met by Chance, And It Created Something Never Seen Before : ScienceAlert
People in Portland Planted Trees. Decades Later, a Stunning Pattern Emerged : ScienceAlert