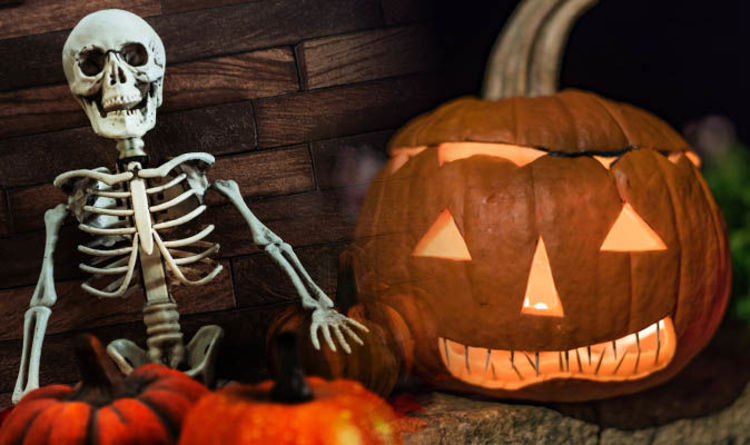 
Halloween is observed worldwide every year by children donning costumes, carving pumpkins and collecting sweet treats from their neighbours.

But the commercialised Halloween celebrations are deeply rooted in ancient Gaelic pagan festivals.

The history of Halloween dates back more than 2,000 years to the Celts and is symbolic of the cycle of life and death.

The most notable link to Halloween is the festival of Samhain, which marks the end of the harvest season and ushers in the start of winter.

Samhain is traditionally observed on the night of October 31 and November 1 when spiritual activity is believed to be at its highest.

According to The Old Farmer’s Almanac, a US guidebook to weather, astronomy and holiday, the holiday was a very significant night for the Celts.

The book explained: “The ancient Celts believed that the veil between the worlds of the living and the dead was at its thinnest during Samhain, thereby making it the ideal time to communicate with the deceased and to divine the future.

“Following the triumph of the Roman Empire over Celt-occupied lands in the 1st century AD, the Romans combined many of the Celtic traditions, including Samhain, with their own.

“This day evolved into All Hallows’ Day or Allhallowmas, hallow meaning to sanctify.

“Years later, the Roman Catholic Church designated November 1 as All Saints’ Day, in honour of all Catholic saints.”

Some astrologers believe the start of November 1 is a powerful date to communicate with the dead because it is the first day of the 11th month – the number 111.

This particular number represents three pillars, with the one in the middle symbolising a veil or barrier between two worlds.

On the night of Halloween, this veil is lifted or weakened enough to let the living and the dead mix together.

Many of these associations were adopted over the years into a more family-friendly format, giving children an opportunity to dress up as monsters, witches and all sorts of haunts.

Today, some will look at Halloween and think about its astrological significance as the days grow shorter and the nights get longer.

Halloween takes place each year with the Sun going through the astrological sign of Scorpio.

Scorpio in the zodiac symbolises transformation, which can be interpreted to mark the transition from life to death.

But it will also signify the physical changes in the landscape occurring around the end of October and start of November.

Because of this, she argued Samhain required a “great deal of faith” from ancient pagans who were preparing their communities for winter.

She said: “This time of year, particularly around Samhain and Halloween – October 31st – implied a lot of unknowns.

“Would there be enough meat to last the winter? What if the winter was longer than usual, and provisions run out?

“What if a sickness runs through the clan, and there aren’t enough dried herbs to cure everybody through the winter? Lots of question marks there.”

New Discovery Could Explain Why We’ve Been Misled Over The Cause of Alzheimer’s : ScienceAlert
Thousands of Mysterious ‘Owl’ Stones May Be The Work of Ancient Children : ScienceAlert
An Unexpected Source Might Be Helping The Universe Glow More Than It Should : ScienceAlert
Small Lakes Keep Growing Across The Planet, And It’s a Serious Problem : ScienceAlert
Dropping Oxygen Will One Day Suffocate Most Life on Earth : ScienceAlert