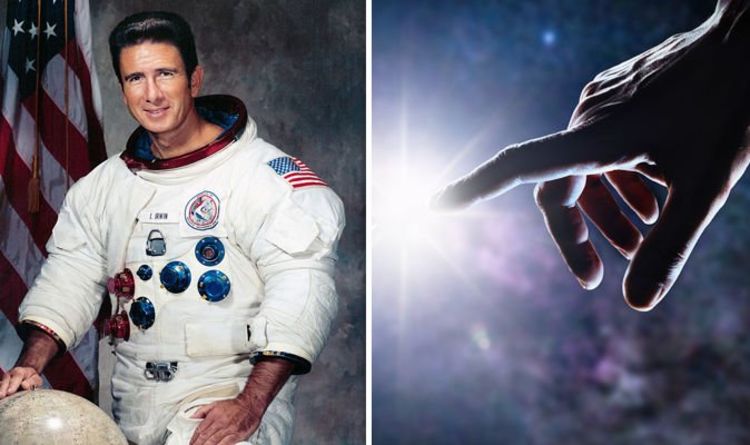 
Mr Irwin, who was the eighth man to walk on the moon, became a born-again Christian following the Apollo mission. He is credited with uncovering one of the most important space discoveries of his era – the Genesis Rock. Chemical analysis of the rock indicated it is an anorthosite, composed mostly of a type of plagioclase feldspar known as anorthite.

The rock was formed in the early stages of the Solar System, at least four billion years ago.

The finding, which was uncovered in 1971, was thanks to a sign from God, according to close friend Dr Farouk El-Baz.

He told the 2009 series: “My friend told me while they were walking on the moon, he noticed a piece of rock that was particularly white.

“He approached it and realised it was going to be significant.

“It was later named by geologists as Genesis Rock and it was very important.

“But Jim [James Irwin] told me, ‘I swear to God, I felt the touch of somebody, God, tap me on my shoulder and said – look there’.

“It was God who made him spot it and bring it back.”

Mr Irwin was raised in a Christian household but stopped actively practising the religion at the age of 10.

However, he became a devout born-again Christian after returning from space.

Beginning in 1973, Irwin led several expeditions to Mount Ararat, Turkey, in search of the remains of Noah’s Ark.

In 1982, he was injured during the descent and had to be transported down the mountain on horseback.

Astronomers Are Now Disagreeing Over Those Epic ‘New Planet Birth’ Images
Here’s How SpaceX Went From 3 Failed Launches to Sending Humans Into Space
Engineers Successfully Test New Chip With Download Speeds of 44.2 Terabits Per Second
5 Ways You Can Help Stop The Coronavirus ‘Infodemic’ That’s Hurting Everyone
Critically Endangered Saharan Cheetah Seen in Algeria For The First Time in a Decade