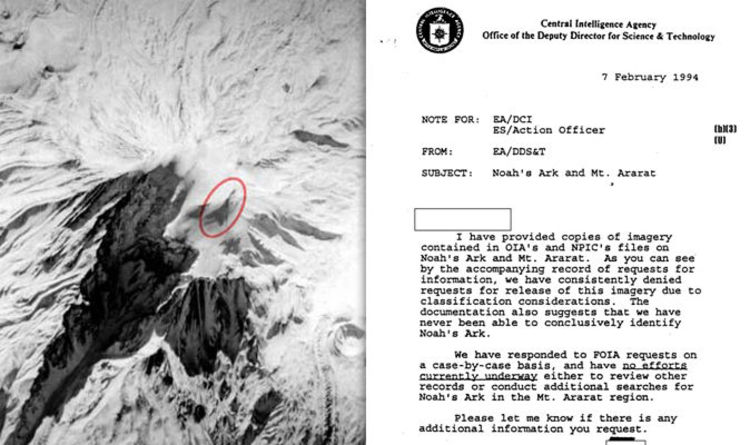 
The US spy agency snapped numerous photos of a small patch of ice near the peak of Mt Ararat in Turkey. First spotted in 1949 during a USAF reconnaissance mission, the “Ararat anomaly” was given the classification of “secret”. Then, for years, the CIA investigated exactly what the object could be, failing to reach a conclusive answer, one of the papers reveals.

The documents titled “Noah’s Ark and Mt. Ararat” shows the CIA seriously considered the possibility the Bible tale was real, it was revealed in Amazon Prime’s “Mysteries” series.

The 2009 documentary revealed: “The CIA has a thick case file on the Ararat anomaly.

“Over 20 years numerous photos were taken, all to be classified as top secret.”

The files were declassified following a Freedom of Information Act request by Professor Porcher Taylor in 2006.

He told Space.com at the time: “I’ve got new-found optimism as far as my continuing push to have the intelligence community declassify some of the more definitive-type imagery.

“I maintain that if it is the remains of something man-made and potentially nautical, then it’s potentially something of biblical proportions.”

Noah’s Ark is the vessel featured in the Bible’s Book of Genesis flood narrative through which God spares Noah, his family, and a remnant of all the world’s animals from a world-engulfing flood.

As of yet, there is no scientific evidence the ship existed as it is described in the Bible, but many have dedicated their lives to trying to find it.

According to the fourth verse of the eighth chapter of the Book of Genesis, following a flood, Noah’s Ark landed on the “mountains of Ararat”.

However, the Defence Intelligence Agency does not have the same optimism, claiming the anomaly shows “linear facades in the glacial ice underlying more recently accumulated ice and snow”.

SpaceX Just Had to Scrub Their Historic Launch. Now What?
Here’s How You Can Watch SpaceX’s Historic First Launch of NASA Astronauts Live
Scientists Detect a Flickering Signal Coming From The Heart of Our Galaxy
The Building Blocks of Life Are Left-Handed, And The Reason Could Come From Deep Space
Critically Endangered Saharan Cheetah Seen in Algeria For The First Time in a Decade