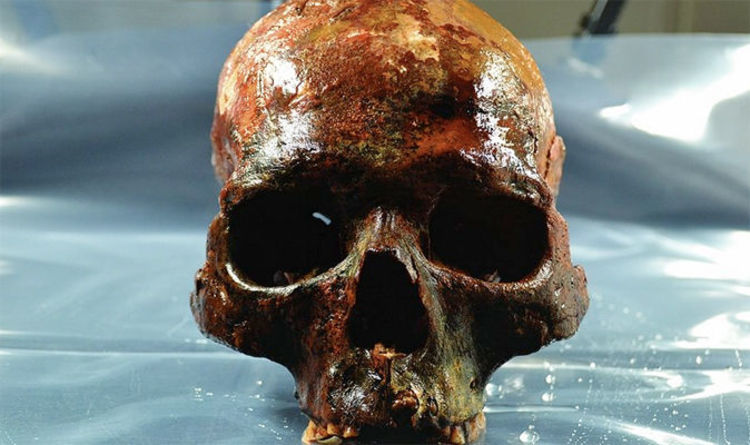 
The remains belonged to Mesolithic hunter-gatherers, a group that existed around 8,000-years-ago between the Old and New Stone Ages, according to researchers from Stockholm University and the Cultural Heritage Foundation (CHF).

The mysterious skulls were found beneath a shallow lake in Kanaljorden, Sweden.

Previously, Mesolithic societies were thought to have shown respect for the bodily integrity of their dead.

This discovery now brings that into question and archaeologist have admitted they do not know why the skulls were mounted on poles.

Fredrik Hallgren, from CFH and who led the archaeological project, said: “We had hopes of finding animal bones, but not this rich complex.

“This is quite remarkable.”

Mr Hallgrenon and his team fisrt began excavatios at the Kanaljorden site near the Motala Ström River in 2011.

The team has now uncovered 8,000-year-old skulls of nine adults and one infant which they believe were found deliberately placed on a densely packed layer of large stones.

Meanwhile two of the human skulls were female, four were male, and two belonged to people between the ages of 20 and 35.

The researchers also found an infant skeleton, whose tiny bones suggested they had been stillborn or had died shortly after birth.

The adult human skulls revealed blunt force trauma near the top of their head and they were also missing their jaw bones.

Two of the skulls also had well-preserved, wooden stakes dislodged inside them.

The spikes had been inserted through the large oval openings at the bottom of the skulls, suggesting they had been mounted prior to being deposited in the lake.

In one case, a spike was still sticking out of the cranium.

Mr Hallgren said: ”These are not people who have been recently smashed in the head and then put on display.

”More than half of them had this healed trauma to the head.”

DNA analysis is ongoing, but the researchers have found two of the men are related.

However, the archaeologist have admitted they they are so far baffled by the discovery.

According to the researchers, it seems like they were deliberately put on display, and it is possible they were buried in another place first.

Hallgren said: ”There are not any close parallels. We are also working on situating this site in the local and the regional archaeological context.”

Co-author of the study Sara Gummesson of Stockholm University added: “We do not have any direct evidence of decapitation.

“It is more likely that the crania were separated from the bodies during decomposition.”

The blunt force trauma may have been inflicted through violence between people, abduction, or some other cause.

The male and female skulls show different signs of trauma which means the violence could have been deliberately related to gender such as spousal abuse or some sort of cultural practice.

The findings were published this week in a study in the journal Antiquity, under the witty title “Keep your head high”.