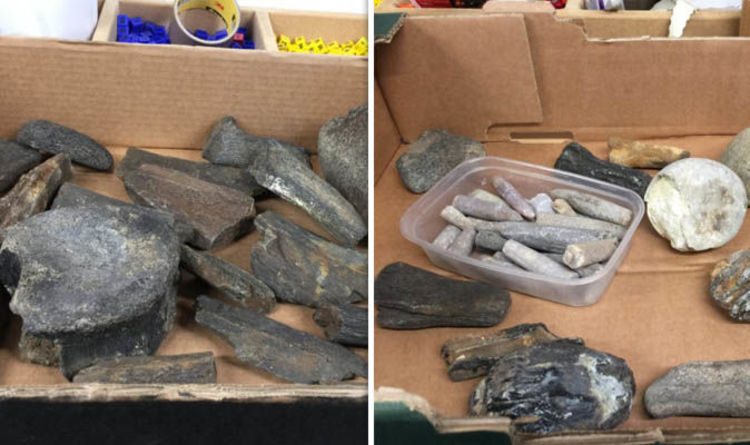 
The remarkable collection was left at the East Anglian Children’s Hospice shop in Norwich – and volunteers asked for help to see if any of the prehistoric relics were valuable.

Now the bones have been found them to be a mixture of medium-to-large mammal bones dating from 500,000 to five million years known as the pleistocene and pliocene epochs.

There are also belemnite guards – from squid-like molluscs – and fossilised echinoids or sea urchins from 70-100 million years ago, as well as mammoth molar teeth, deer antler and bison limb bones.

Shop manager Sally Rix said: “Apparently the lady who dropped them off said they were genuine and she hoped we could get some money for them.

“We were all very excited because we had never had anything so usual or that ancient handed in before.

“One of my volunteers offered to take them to Norwich Castle Museum in her shopping trolley.

“She was stopped on the way by someone who was an anthropologist who was very interested.

“She needed help to get on the bus because of the bones were so heavy – the driver was amazed at the contents.”

“But we would still like to know who handed them in – to thank them. We are having the bones valued and they will be auctioned off.”