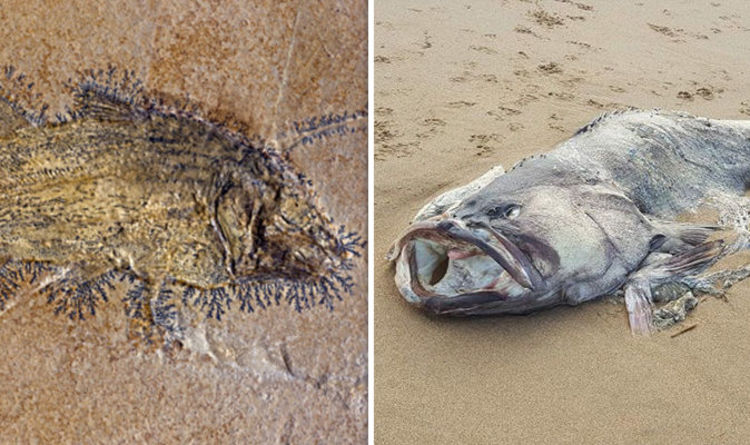 
The huge unidentified creature has prompted an international quest over what the creature could be – with several experts saying they have “never seen anything like it”.

John and Riley Lindholm came across the creature on a beach at Bundaberg in southern Queensland this week.

The couple took several pictures of the sea beast, which they posted on social media, requesting help in identification.

However, adding to the online theories, the fish had “vanished” when the couple returned to the spot the next day.

Mr Lindholm, who has spent his life around fish working as a charter skipper, said he had no idea what it was.

He explained: “I’ve seen a lot of fish, and a lot of big fish, but I’ve never seen anything like it.

“I thought it might have been a groper, but looking at the head shape it still may be a groper, but it just doesn’t seem to fit with what other people up here have told me.

“It was almost as tall as me — Riley’s disappointed she didn’t get me to lay down beside it so she could get a better photo. It was a big, big fish.

“I’ve seen whales wash up on the beach but the size of this and the kind of fish it was, it took my breath away.”

He remarked that the discovery was one of the “most unusual things” he had ever come across.

Some online viewers put forward the theory that the fish was a coelacanth — an ancient fish long thought to be extinct until it was discovered again in 1938.

Officials on the case, including Queensland Boating and Fisheries Patrol District Officer Geoffrey Fergusson, said the most likely culprit was a Queensland Groper.

However, despite the theories surrounding the creature, the patrol body said the “condition of the fish made a definitive identification difficult”.

A spokesman said: “How the fish came to be washed up on the beach and its cause of death also could not be determined.”

High-Fat Diets May Break The Brain’s Ability to Regulate Calories : ScienceAlert
Bigfoot Has a Very Simple Explanation, Scientist Says : ScienceAlert
Scientists Discover a Weird New Form of Ice That May Change How We Think About Water : ScienceAlert
A Lost Interview With The ‘Father of The Big Bang’ Was Just Discovered : ScienceAlert
What Can They Actually See? : ScienceAlert