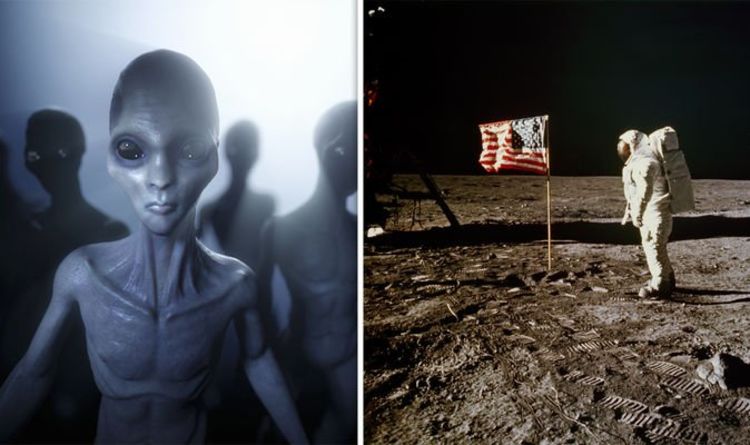 
As NASA marks 50 years since the first people stepped foot on the Moon on July 20, 1969, some are claiming there is more than meets the eye. Conspiracy theorists first began claiming that NASA knew of aliens on the Moon when the space agency supposedly deleted 40 rolls of film from the Apollo 11 mission. The claim has credit as it was made by Bob Dean, a United States Army Command Sergeant Major, who also served at the Supreme Headquarters Allied Powers Europe (SHAPE) of NATO.

Mr Dean said: “Ladies and gentlemen, my government, NASA, which many of us in the United States say stands for Never A Straight Answer, proceeded to erase 40 rolls of film of the Apollo Program — the flight to the Moon, the flight around the Moon, the landings on the Moon, the walking guys here and there.

“They erased, for Christ’s sake, 40 rolls of film of those events.”

However, it was Dr Steven Greer, founder of The Disclosure Project and The Center for the Study of Extraterrestrial Intelligence (CSETI), who added fuel to the alien theory fire, as he claimed to have had secret discussions with close acquaintances with Neil Armstrong and Buzz Aldrin.

Dr Greer claimed in a blog post that people close to the first Moon landers admitted that the duo did see evidence of aliens while on the historic missions.

Dr Greer wrote: “Close friends and very close family members of both Neil Armstrong and Buzz Aldrin have separately told me that indeed there were numerous, large UFOs around the crater where the Lunar Module landed and that these were seen by both Armstrong and Aldrin.

“I have also spoken to military officers that have seen the footage of this event- but it has never been made public.”

However, Buzz Aldrin has directly addressed claims he saw UFOs saying he saw lights, but did not think they were of alien origin.

Dr Aldrin said in a 2014 Q&A: “On Apollo 11 in route to the Moon, I observed a light out the window that appeared to be moving alongside us.

“There were many explanations of what that could be, other than another spacecraft from another country or another world – it was either the rocket we had separated from, or the 4 panels that moved away when we extracted the lander from the rocket and we were nose to nose with the two spacecraft.

“So in the close vicinity, moving away, were four panels. And I feel absolutely convinced that we were looking at the sun reflected off of one of these panels.”

A Planet Almost Exactly Earth’s Size Has Been Found 72 Light-Years Away : ScienceAlert
More Life Than We Ever Realized Could Survive in The Deep Dark of The Ocean : ScienceAlert
Millions Are at Risk of Flooding Due to Climate Change – But Not Where You’d Think : ScienceAlert
Incredible ‘Fairy’ Robot Sails on The Breeze Like a Floating Dandelion : ScienceAlert
A Billion-Dollar Biotech Company Plans to Bring The Dodo Back to Life : ScienceAlert