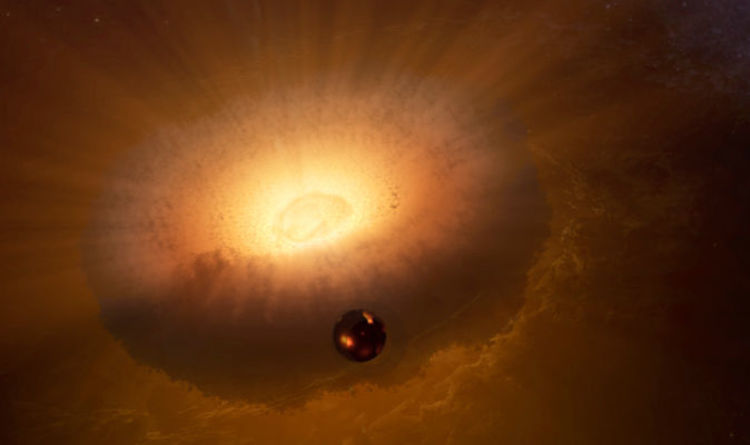 
Experts had previously believed the Moon was formed when a Mars-sized infant planet – known as Theia – hit Earth with a glancing blow, striking at a 45 degree angle some 4.5 billion years ago.

As a result, chunks of Theia and Earth collected in Earth’s orbit to eventually form the Moon.

But experts from Harvard University, the University of Bristol and University of California now believe the chance the collision actually happened are virtually impossible.

New research suggests Earth did hit another small planet some 4.5 billion years ago, but the collision was head on.

The impact was so intense that it vaporised the smaller planet, creating a ring of dust – called a synestia – around Earth.

Chunks of molten rock from Earth joined the synestia, which allowed the Moon to form.

In astronomical terms, synestias are extremely brief, only lasting for a couple hundred years, before they shrink rapidly, causing rock vapour to condense into liquid, which ultimately becomes the core of a planet, or in this case the Moon.

According to experts in the study, this would explain why the Moon has a different chemical composition from Earth as the majority of it is formed from another planet.

Sarah Stewart, professor of Earth and Planetary Sciences at University of California, said: “The Moon is chemically almost the same as the Earth, but with some differences.

“This is the first model that can match the pattern of the Moon’s composition.”

Simon Lock, graduate student at Harvard and visiting student at UC Davis who first developed the idea of synestias, said: “Our model starts with a collision that forms a synestia.

“The Moon forms inside the vaporized Earth at temperatures of four to six thousand degrees Fahrenheit and pressures of tens of atmospheres.”